An important part of the annual CHESS Users’ Meeting is the display and discussion surrounding users who present their work via posters. 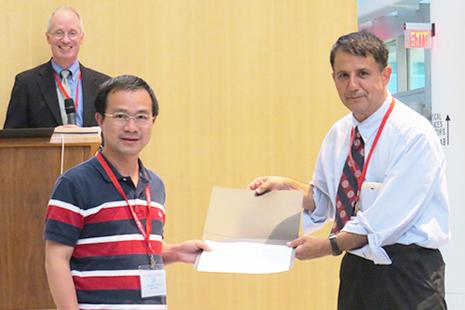 This year 42 posters covered the gamut of topics from new technical advances in hardware, software and beamline capabilities to the newest scientific results and achievements of students, post-docs and user groups. To recognize both types of achievements, CHESS has a tradition of awarding two poster prizes, one for best technical achievement and one for best science results.

This year’s award for best science display went to Mark C. Weidman and William A. Tisdale from the Massachusetts Institute of Technology collaborating with CHESS scientist Detlef-M. Smilgies for their poster "Transient Symmetry Breaking Observed During Real-Time Self-Assembly of a Nanocrystal Superlattice." Motivating the work, they discuss how during solvent evaporation, monodisperse colloids undergo a phase change in which the isolated, disordered, non-interacting colloidal particles self-assemble into a highly-ordered, close-packed superlattice. Although initial and final states can be readily characterized, little is known about the pathway and dynamics between these two diverse states. This study utilized real-time in-situ grazing-incidence X-ray scattering measurements (at the D1 beamline) to track the self-assembly of faceted lead sulfide nanocrystals as they progress from colloid to superlattice. After explaining nanocrystal characterization, they show strategies for in-situ experimental setup, real-time imaging, measuring the kinetics of self-assembly, and conclude with an overall picture of superlattice formation. They conclude that the pathway includes intermediate states, symmetry-breaking, and different timescales for orientation and densification.

In the best technology category, Qingqiu Huang and Doletha M. Szebenyi of the MacCHESS group were chosen for their poster “High Pressure Cryocooling Improves Protein Crystal Diffraction Quality.”  They provide first some historical perspective discussing how high pressure cryocooling – during which crystals are pressurized to 200MPa before being cooled to liquid nitrogen temperatures - was developed as an alternative method for cryopreservation of macromolecular crystals. The poster showed striking images of experimental results from the past year, documenting how high pressure cryocooling improves X-ray diffraction quality of protein crystals in two respects. First they showed how high pressure cryocooling dramatically improved the diffraction resolution of three protein crystals. They outlined procedures and specimen handling recipes under which diffraction resolution improves by almost a factor of two, for example from 2.4 to 1.5 Angstroms. Second, they show four specimens where high pressure cryocooling at pressures over 300MPa transformed non-merohedral twinned-crystals into single-crystals.

In both cases, CHESS users are invited to contact staff to learn more about in-house capabilities and how these advances can aid their research programs.