The standard X-ray protein crystallography experiment requires a single protein crystal specimen that is large enough to collect a “complete” data set, that is, to collect all the available diffraction peaks to a given resolution. 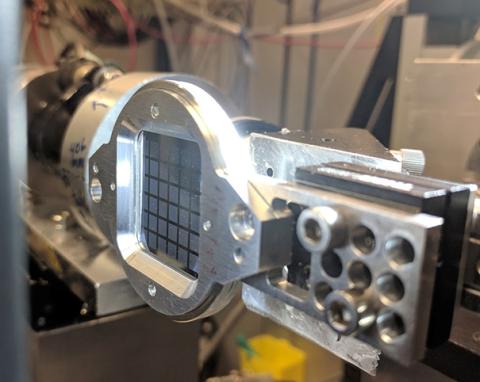 The sample chip loaded and placed on the piezo stage.

But what if large crystals are not available? A team of scientists at MacCHESS and the University of Toronto is pushing what is possible for small protein crystals at storage ring sources.

While structural biologists have expanded their purview to increasingly large and complex biological systems, the necessity for reliable, atomic resolution structural data for those systems has not changed. However, it is simply not possible to grow sufficiently large crystals for many systems. The necessity of large crystals in protein crystallography stems primarily from two factors. First, all other things being equal, microcrystals diffract more weakly than large ones, because the crystal volume, and thus number of protein molecules diffracting the X-rays, is lessened. Second, and more insidiously, protein microcrystals succumb more quickly to radiation damage – a loss of diffraction intensity resulting from X-ray induced, stochastic ionization and bond cleavage. These factors result in apparently contradictory solutions: increase the beam intensity to induce more diffraction, but at the expense of crystal lifetime; or lower the beam intensity, but collect weak data.

One solution to this problem is serial microcrystallography– collecting small data sets from several microcrystals and merging them together. This technique, which originated at XFELs, has found utility in storage ring sources as well. Because standard techniques are increasingly unsuitable for smaller and smaller crystals, delivering thousands to millions of small crystals to the X-ray beam presents its own brand of challenges.

Scientists from MacCHESS and the University of Toronto have teamed together to create an X-ray diffraction beamline specifically optimized for serial microcrystallography. Using the G3 beamline at CHESS, MacCHESS postdoc Jeney Wierman, engineer Mike Cook, and staff scientist Aaron Finke have built a diffractometer station with a new focusing element, the compound refractive lens (CRL), to deliver a beam that is less than 20 microns in diameter, well suited to collecting diffraction data from small crystals. The CRL is a series of beryllium lenses that focuses the X-ray source beam to an intense microbeam. Scientists from Dwayne Miller’s group from the University of Toronto have developed a sample loading chip system that allows for high throughput loading of up to over 100,000 microcrystals on a single chip, loaded onto a fast and highly accurate piezoelectric stage, which efficiently delivers each crystal to the X-ray beam. In combination with the DECTRIS EIGER 1M detector, data can be collected hundreds of times per second, so microcrystals diffraction data is collected as quickly as possible to avoid radiation damage.