A new X-ray technique developed at Cornell offers an unprecedented look at the elaborate inner workings of batteries while they are in use – a breakthrough that is already yielding important findings for the development of next-generation energy storage. 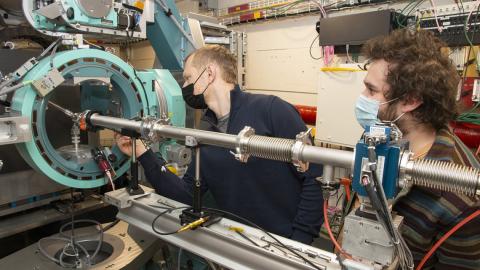 Despite the everyday prevalence of batteries, scientists still have many questions about the chemistry happening inside them. Common techniques to study batteries help to detail the structural phases of materials or the charge state of individual ions, but fail to show the relationship of both as the battery is operating.

The new technique – operando resonant elastic X-ray scattering – was published Dec. 15 in the journal ACS Energy Letters and gives researchers a tool to study battery charge-structure dynamics at the nanoscale.

“It’s exciting because it opens up a completely new way to investigate fundamental mechanisms in electrochemical systems,” said Andrej Singer, assistant professor of materials science and engineering and senior author of the study. “Researchers have thought about this idea, but until now, nobody has demonstrated a successful application of it in operando.”

They key finding confirmed for the first time a decades-old theory that electrochemistry is tightly coupled with structural phase transformation.

“Through the usage of both X-ray diffraction and spectroscopy-enabled facilities like CHESS,” Weinstock said, “we were able to link our understanding of the physical structure to the chemistry of the systems we were studying.”

Weinstock added that the X-ray technique could help to create a cleaner, more sustainable future by improving a wide variety of energy-storage systems with structural phase changes, including sodium-ion batteries.

“Sodium-ion batteries offer an exciting alternative to the ubiquitously used lithium-ion batteries in our phones, computers and electric vehicles due to the abundance of sodium and the transition metals that allow it to be useful in batteries,” Weinstock said.

The research was funded by the National Science Foundation and by U.S. Department of Energy. Collaborators included researchers from the Cornell High-Energy Synchrotron Source and the University of California, San Diego.

Syl Kacapyr is the PR and Content Manager for the College of Engineering.