Cryocooling at atmospheric pressure generally causes some degradation in diffraction quality. HPC, applied with 200-400 MPA (200 Mpa, or 2 kbar, is standard) of helium gas, can reduce this degradation. 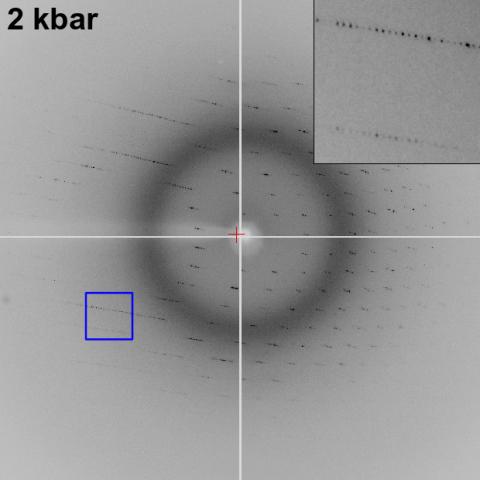 HPC is worth trying if you have crystals that diffract well at room temperature, but have problems when cryocooled by normal means. These problems include degraded diffraction quality of crystals cryocooled in the usual way (i. e. with added cryoprotectant), as well as inability to find any suitable cryoprotectant after exhaustive search.

An example: crystals of the bacterial pilin protein SpaD showed much improved diffraction when cryocooled under pressure – see images above. HPC was essential in obtaining the structure of full length SpaD from Corynebacterium diphtheriae, and this structure enhances understanding of the role of isopeptide bonds in controlling the stability and interconnection of protein modules in assembly of the pili of Gram-positive bacteria (Kang et al. 2014, Acta Cryst D70, 1190-1201).

Improved resolution due to HPC is primarily due to two factors: (1) pressurization converts internal water in the crystal to a high density amorphous (HDA) form, which causes less disruption to the crystal lattice on cooling than the room pressure low density amorphous (LDA) form; (2) the ability to reduce or eliminate cryoprotectant, and hence any effect that the extra solvent component could have on crystal packing.

Not all crystals show better diffraction using HPC. In particular, those that diffract extremely poorly are unlikely to be much improved; the molecules in such crystals are poorly packed in the first place. When improvement in resolution is observed, it is typically on the order of 0.5-1.0 Å.