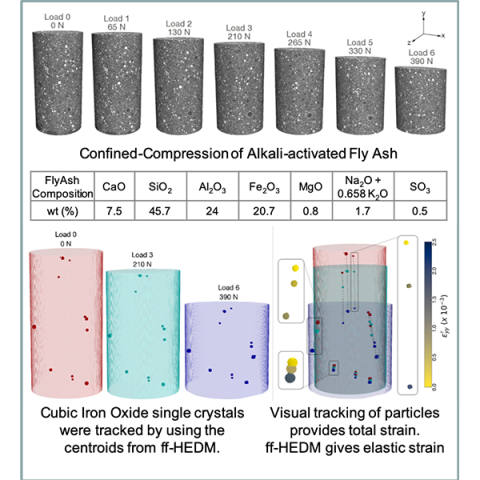 Broader Impacts of this work?

• ForACMs to realize their potential as next generation of concrete binders understanding and predicting their performanceis crucial, especially accounting for  the compositional variability in the source materials (often waste by-products).

• Typically, nano-indentationis used as the primary tool used to characterize the spatial heterogeneity. Here we use 3-D X-ray techniques andenable quantification of the heterogeneity both spatially and across phases during in-situ loading.

•  Without load, there is a large variation in the elastic strains in cubic iron oxide. ff-HEDM microscopy captures the compositional heterogeneity potentially caused by the substitution of iron atomswith other atomic species.

• Currently there is no comparable technique to probe the heterogeneity during in-situ loading.

• Using ff-HEDM the average response of multiple phases can be derived in order to understand the behavior of load partitioning.

• Mappingthecompositional and spatial heterogeneities arising from the inherent variability of ACMs is enabled by the use of characterization tools at the microscale during in-situ loading.

• Resources at CHESS such as RAMS2 load frame for a 360°view of the sample and data reduction algorithms
for diffraction data were instrumental in the success of the project.

Research was conducted at CHESS. CHESS is supported by the NSF AwardDMR-1332208.