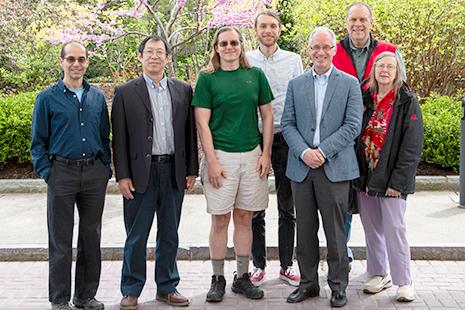 CHESS-UO exists to promote research and education at CHESS, develop a diverse and engaged user community, foster the exchange of ideas among CHESS users, communicate user needs and priorities to CHESS management, and provide the users’ perspective to funding agencies and other outside organizations with an interest in CHESS operations.

Membership in CHESS-UO is open to scientists, engineers, educators, and other experts, who have  an interest in research and education at CHESS. All current and former users of CHESS along with CHESS staff are automatically members. Any other scientist, engineer, educator or expert may become a member either by attending a Users Meeting in person or by expressing a desire to join in writing to the Director of the CHESS User Program Office.

A member may leave the CHESS-UO by submitting a request in writing to the Director of the CHESS User Program Office.

The business of the CHESS-UO will be conducted by an executive committee of six regular (voting) members plus additional non-voting members.

5.3 Duties of executive committee members - Members are expected to participate in all meetings of the Executive Committee and assist in organization of the annual Users Meeting. Members advise the CHESS Director on paper and poster prizes awarded by CHESS, and act as points of contact for CHESS users to communicate with the Executive Committee.

5.4 Officers - Only regular members of the Executive Committee are eligible to be officers. The term of each officer shall be one year, extending from one Users Meeting to the next.

The Secretary is appointed by the Chair and is responsible for compiling and distributing minutes of each meeting of the Executive Committee. The Director of the CHESS User Program Office shall maintain a complete record of minutes.

If the office of Chair becomes vacant, the Vice Chair shall become Chair for the remainder of that term, and then serve the next term in the regular order of succession.

If the office of Vice Chair becomes vacant, the Executive Committee shall elect a replacement from among its members.

If for any reason the Executive Committee is unable to fill the office of Chair or the UEC becomes inactive, the CHESS Director shall have the authority to appoint an interim chair to serve until the next Users Meeting.

5.7 Elections - Prior to each Users Meeting, an electronic election shall be held to replace the two members of the Executive Committee whose terms are expiring as well as to fill any additional vacancies that may arise.

The Director of the CHESS User Program Office will confirm that the nominees are willing to stand for election, and compile the slate of candidates together with a brief biographical sketch of each. These shall be announced to the CHESS-UO membership no later than one week prior to the opening of the election.

The open election period shall be set by the Chair. It shall begin at least two weeks prior to the Users Meeting and end during the meeting. All members of the CHESS-UO are eligible to cast a ballot for a single candidate, regardless of the number of seats to be filled.

5.8 Meetings and voting -The Executive Committee shall hold an annual face-to-face meeting to coincide with the Users Meeting; members of the Executive Committee unable to attend in person may participate remotely. Additional remote (web) meetings may be called as necessary by the Chair or upon petition of at least three of the regular members. The Chair is responsible for notifying all members of upcoming meetings at least one week in advance.

Members of the Executive Committee are expected to disclose any personal or professional circumstances that might be perceived by a reasonable observer to constitute a conflict of interest or source of bias with respect to any issue before the committee. Members shall recuse themselves from any vote where a clear conflict of interest exists.

Revisions and amendments to these Bylaws may be proposed by the Executive Committee. When changes are proposed the Chair shall set a time and format for voting, which may be either electronic or in person at the Users Meeting. In either case, the proposed changes shall be announced in writing to the members of CHESS-UO at least two weeks before voting opens. If voting is held electronically, the voting period shall last at least two weeks. Approval of any revisions or amendments to the Bylaws requires a two-thirds majority of the members voting.