CHEXS staff have a long history of developing technology in order to create fertile ground for research innovation. 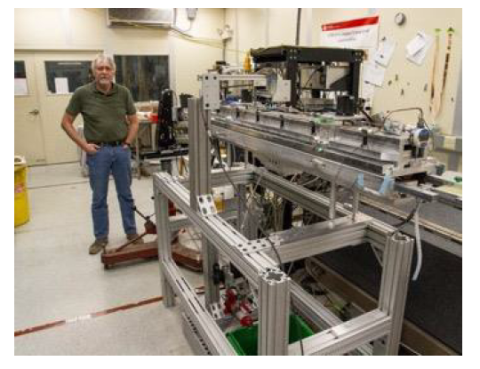 CHEXS aims to advance the state of the art in five areas of synchrotron and X-ray technology. These developments, which are engrained in the history of the lab, serve to provide capabilities needed to achieve the scientific goals of CHEXS and enable new and broader applications of synchrotron radiation beyond the immediate performance and scope of CHEXS.

CHESS Compact Undulators (CCUs), invented and designed at CHESS, are the X-ray sources for all of the CHEXS beamlines. Their defining feature is novel scheme for supporting and manipulating the magnetic force inherent in all undulators, resulting in a 5x reduction in device cost and a commensurate gain in flexibility and reliable tuning. X-rays for CHEXS are provided by CCUs, each with a period of 28.4 mm and a maximum magnetic field strengths of ~0.92T. In addition to enabling CHEXS, the undulator R&D program has had an impact outside CHESS. Specifically, a 30 centimeter “delta undulator” prototype – an undulator built on the same engineering approach as the CCUs but for linear accelerators, rather than synchrotrons. SLAC subsequently installed a 3.2-m version of this undulator on the Linac Coherent Light Source. Technical R&D in this area impacts all of the scientific areas of CHEXS, since the undulator sources installed to commission CHEXS can be upgraded.

In order to achieve their scientific objectives, several of the CHEXS beamlines require diamond-based monochromator optics. First generations of such monochromators have already been implemented at CHESS over the last several years, but have known limitations, owing both to properties of the diamonds themselves, such as size and quality, as well as particular engineering challenges related to heat dissipation and mount-induced strain. Technical R&D in this area at CHESS focuses on providing optimal performance for CHEXS, as well as advancing the state of the art of diamonds for monochromators and other applications.

Curved crystal analyzers collect and filter X-rays emitted or scattered over a large solid angle, and play a critical role in a variety of experimental techniques employed for CHEXS, including X-ray emission spectroscopy, inelastic scattering, and diffraction imaging. Technical R&D in this area builds on decades of experience and success at CHESS, and directly and immediately impacts scientific objectives of beamlines PIPOXS and QM2.

Single-bounce, glass monocapillaries (SBCs) are reflection-based X-ray optics able to produce focused X-ray beams in the range of 5-40 microns FWHM. A 20-year, in-house program to develop and fabricate SBCs at CHESS has been a critical component of CHESS’s scientific impact in virtually all subject areas, in part because their small size and wide energy range has enabled them to extend many methodologies at virtually all CHESS beamlines towards microbeam applications. Continued development in this area will most directly impact scientific objectives on beamlines CMB, HP-Bio, and IMP, all of which require focusing. In particular, technical R&D focuses on extending SBCs at CHESS to higher energy and smaller beams, while maximizing flux.

Invented and fabricated exclusively at CHESS, CCAs are the key technology enabling a technique called confocal X-ray fluorescence microscopy (3D-CXRF) to be performed at micron-scale resolution. As such, this area of technical R&D is critically linked to the scientific objectives in Plant Science. Further, we note that CCAs are already available for general users at APS 20-ID, and have high potential impact in virtually all other scientific areas which employ X-ray fluorescence microscopy. A CCA consists of micron-scale, lithographically fabricated arrays of collimating channels, all directed toward a single source position. In 3D-CXRF, an incident focused beam impinges on a sample, stimulating secondary emission. Because of the CCA, the only fluorescence X-rays that reach the detector are those generated in the mutual probe volume formed by the overlap of the incident beam and each of the CCA channels. By scanning the sample through this probe volume, a 3D map of elemental concentration can be obtained, even on extended samples not suitable for tomographic methods. Such devices have permitted 2-micron depth resolution over the energy range from 2 to 20 keV, and have been used for a variety of applications.