Developing the Next Generation of CHESS Compact Undulators

A key enabling technology for the recent CHESS-U upgrade was the CHESS Compact Undulator (CCU). Progress is now being made towards a new generation of even higher performance compact insertion devices, with variable gaps and thermal compensation capabilities. 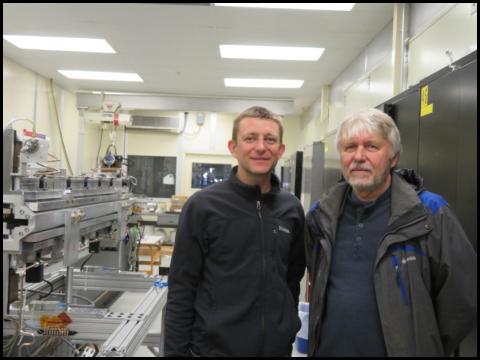 Ivan (left) and Alexander (right) Temnykh. Alexander Temnykh is a Staff Scientist at CHESS. Ivan Temnykh is the owner of Pine Hollow Diagnostics. They are a father and son team who collaborated on the CCUs. (Photo taken before Covid-19.)

A key enabling technology for the recent CHESS-U upgrade was the CHESS Compact Undulator (CCU). These devices deliver world-class high-energy x-ray beams to our experimental hutches at a fraction of the cost and requiring significantly less physical space than traditional insertion devices. First generation variable-phase CCUs, built by KYMA using technology licensed from Cornell, presently generate x-rays for 6 of the 7 operating beamlines at CHESS. As reported in two recent papers in NIMA, progress is now being made towards a new generation of even higher performance compact insertion devices, with variable gaps and thermal compensation capabilities. Prototype variable-gap CCU devices have been demonstrated with excellent mechanical and magnetic performance, which exploit a novel hydraulic-assist mechanism (patent pending) to preserve the low cost and light weight properties of the original CCU. Two dozen miniature hydraulic cylinders distributed along the 1.5m length of the undulators compensate 90% of the strong magnetic forces between magnetic arrays while minimizing deflection of the girders. These insertion devices have also demonstrated an active temperature-compensation mode which can stabilize the K parameter to a high precision over long times. In addition, a passive temperature-compensation concept  has been developed to exploit the differential thermal expansion of different girder fabrication materials, to compensate for temperature changes in the permanent magnet arrays that generate the undulator fields.

Importance
The undulator is among the most important components of a beamline, and traditionally a major driver of beamline cost. Maintaining the low cost and small size of CCUs is critical, but adding functionality is also necessary to keep CHESS beamlines at the forefront of facilities available to users. Specifically, the adjustable gap functionality will allow higher undulator fields for a given undulator period, or more periods per unit length, which will boost the x-ray flux. They also improve the quality of undulator higher harmonics, and reduce the probability of radiation damage to permanent magnets during operation. Thermal compensation will allow better long-term beam stability for x-ray experiments.

Need for CHEXS Experimental Capabilities
In addition to the four programmatic research programs (QM2, PIPOXS, FAST, and HPBio), CHEXS supports research in new x-ray technologies, including insertion device development and high heat load optics development. Compact undulator technology is a significant broader impact of the CHEXS program, and will be essential for the next generation of beamlines at CHESS, including the newly funded High Magnetic Field beamline. CHEXS has unique fabrication and testing spaces for insertion device development, and strong partnerships with industrial partners for technology transfer.

Funding
This work is based upon research conducted at the Center for High Energy X-ray Sciences (CHEXS) which is supported by the National Science Foundation under award DMR-1829070.