Software control of the BAM-2 automounter

The BAM-2 automounter in use at MAcCHESS beamline is controlled primarily through the ADX data collection interface, and a separate BAM-2 interface provides access to additional features. 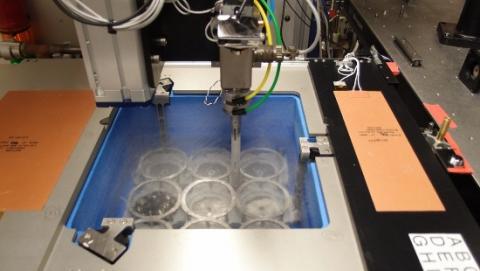 The most frequent automounter commands are incorporated into the ADX "manual Control" panel. This panel can be opened from the ADX main menu panel (SETUP > MANUAL CONTROL).

The commands are relayed through a dedicated interface which communicates with the automounter, provides access to more obscure commands, and displays detailed status information. This interface can be started up by double-clicking the "(Re)Start BAM2" icon on the left side of the desktop.

Probably the ADX data collection will already be running. If not, double-click the "Collect Data" icon at the left edge of the desktop. Open up the "Manual Control" panel by clicking the button from the ADX main menu.

If the BAM2 interface is not running, double-click the "(Re)Start BAM2" icon at the left edge of the desktop.

If the STATE bar on the BAM2 interface status panel is red and says "unpowered" "not_powered", read up on automounter states and transition it to "standby" mode by pushing buttons on the automounter robot control bar in the hutch.

The most frequent commands for use of the BAM-2 automounter are available from the ADX "Manual Control" panel. 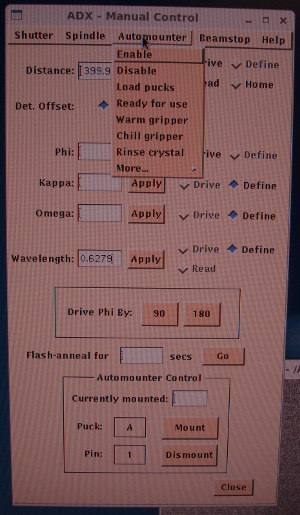 To MOUNT a sample, select the appropriate puck and pin at the bottom of the ADX Manual Control panel, then click "MOUNT".

To DISMOUNT a sample, click the "DISMOUNT" button on the ADX Manual Control panel.

Additional commands are available from the "Automounter" menu of the ADX Manual Control panel.

LOAD_PUCKS - This moves the gripper arm back out of the way, then disables power to the robot motors so that pucks may be loaded or unloaded safely.

READY_FOR_USE - Once puck loading is finished, this returns the automounter to READY status, but first the robot motors must be put into STANDBY mode by pushing buttons on the robot control box. See automounter states.

WARM/DRY/DEFROST - this removes frost build-up from the gripper. The automounter may automatically attempt a defrost if it has trouble dismounting a sample, otherwise this should be manually called every so often (this depends on the humidity).

CHILL - The automounter is smart enough to chill down the gripper before it handles samples, but if you know you will be using it soon, you can save time by pre-chilling it in advance.

RINSE - This command plucks a sample from the goniometer, dips it up and down in the liquid nitrogen, then replaces it on the goniometer. It is effective at removing surface frost.

The top portion of the BAM-2 interface constantly displays the status of the automounter.

STATE: indicates what command the automounter is executing, or the stat it is in. Read more.

CURRENTLY MOUNTED: indicates which sample is currently mounted on the goniometer. If there are inconsistencies with the currently moutned status, see the section below on how to reconcile this.

GONIOMETER OCCUPIED: This is the signal from the laser sensor which checks whether a sample is actually on the goniometer.

TEMPERATURES: The temperatures of the sample dewar and the gripper are listed in Centigrade. If these stray noticably from -190, check the level of nitrogen in the dewar and if necessary alert staff.

The BAM-2 interface stat panel also has several other indicators which are intended for the administrator, not for you, so you can ignore them.

The "User" panel duplicates the functionality of the ADX Manual Control panel, but it has a few useful features of its own, including a "Pre-rinse" checkbox. If your samples tend to be frosty and you find yourself rinsing each and every one of them, you can set the "Pre-Rinse" checkbox, and each sample will be rinsed as it is being mounted. This adds about 40 seconds to the mount, but it is faster than performing a separate mount and then rinse.

The "Admin" panel has commands that users will not need, but you may see the MacCHESS staff going there while setting up or debugging the automounter. For example, the "Align All" button calibrates the position of the goniometer, and of the sample plate. This is normally performed just after pucks are loaded.

The BAM-2 interface has a separate "Mount/Blocking panel" for displaying a log of which samples have been mounted, and "blocking" sample positions from being mounted. Read more.

The ADX Manual Control panel has a textbox which displays the identity of the currently mounted sample. If no sample is mounted, it is vacant.

The BAM-2 interface status panel has its own display of which sample is currently mounted. It also has a checkbox for "Goniometer occupied" which displays the signal from the laser sensor.

You can verify the true state of the goniometer by checking the webcam.

If these various status indicators do not all agree, you can correct them. If a sample is actually mounted, but the indicators do not reflect that, figure out which sample is mounted (from your notes, or from the log files) and enter it in the textbox (e.g. C5), hit enter, then move the mouse out of the Manual Control panel for a few seconds until it updates properly. It should also propagate this information to the BAM-2 interface.

Similarly, if no sample is mounted, but the "currently mounted" textbox thinks there is, click on the textbox, erase the text there and hit Enter, then move your mouse while it updates.

If the laser sensor is not reading properly, you should report this to MacCHESS staff (or to the CHESS operator after hours) so that they can fix it or effect a workaround. 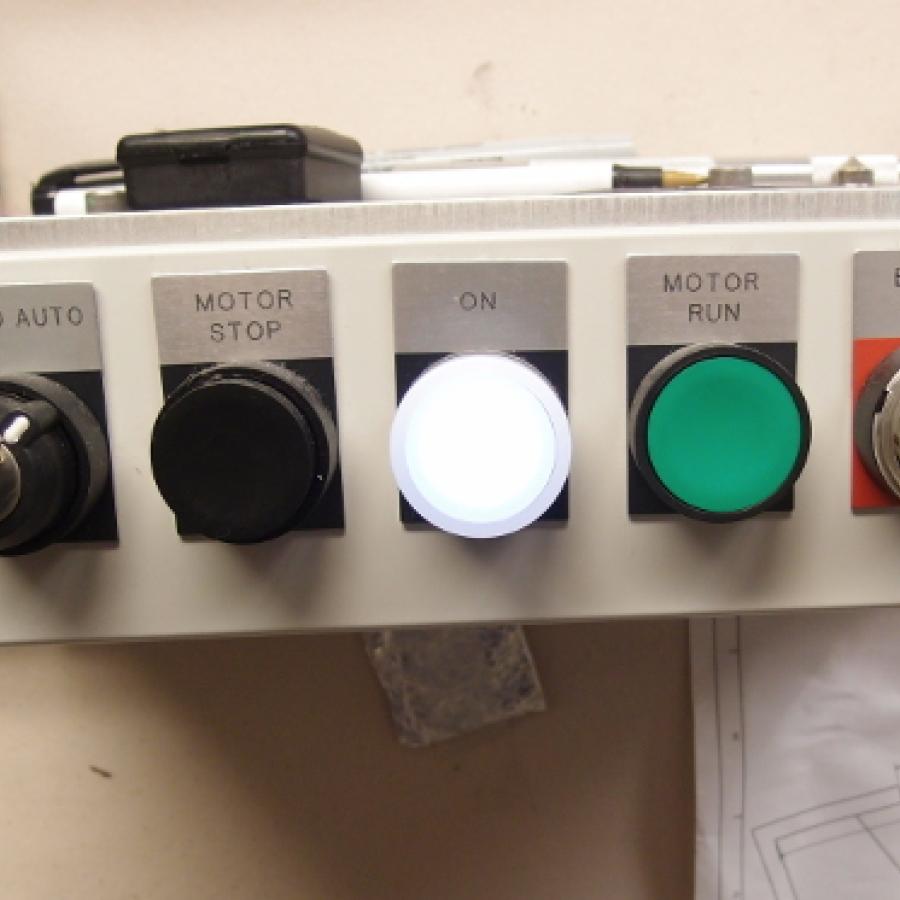 To facilitate user safety, the BAM-2 automounter has states in which the robot motors cannot be operated. 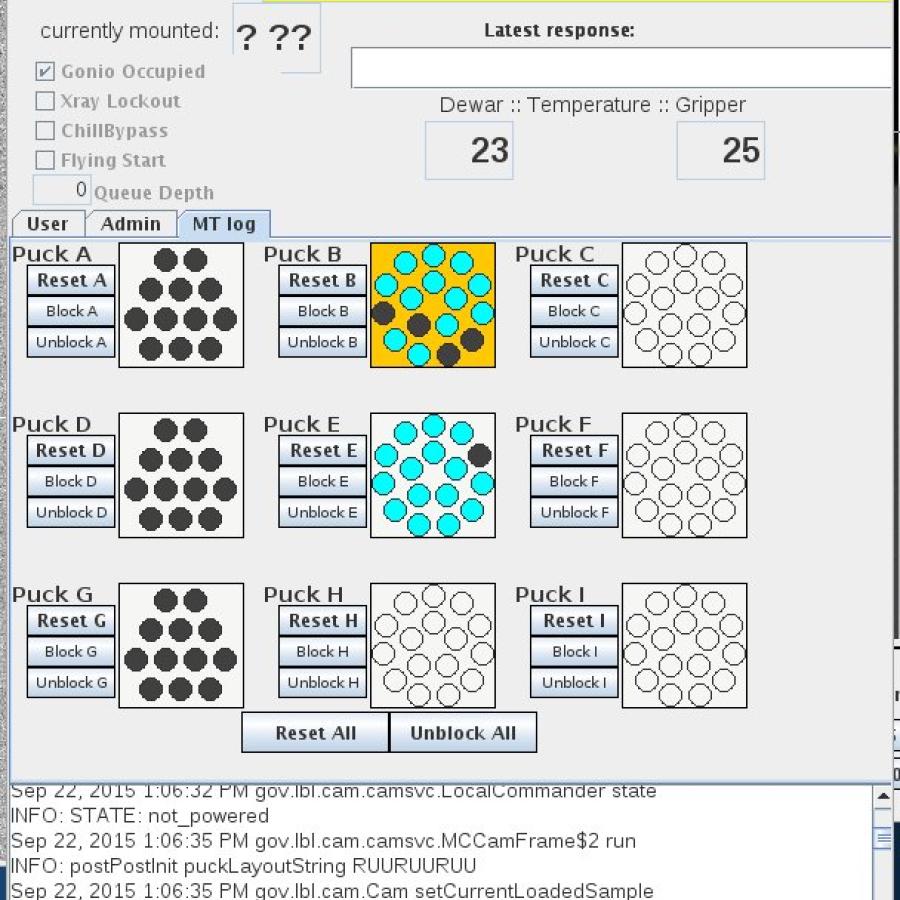 The interface which controls the BAM-2 automounter has a panel for logging mounts and "blocking" pucks and pins. 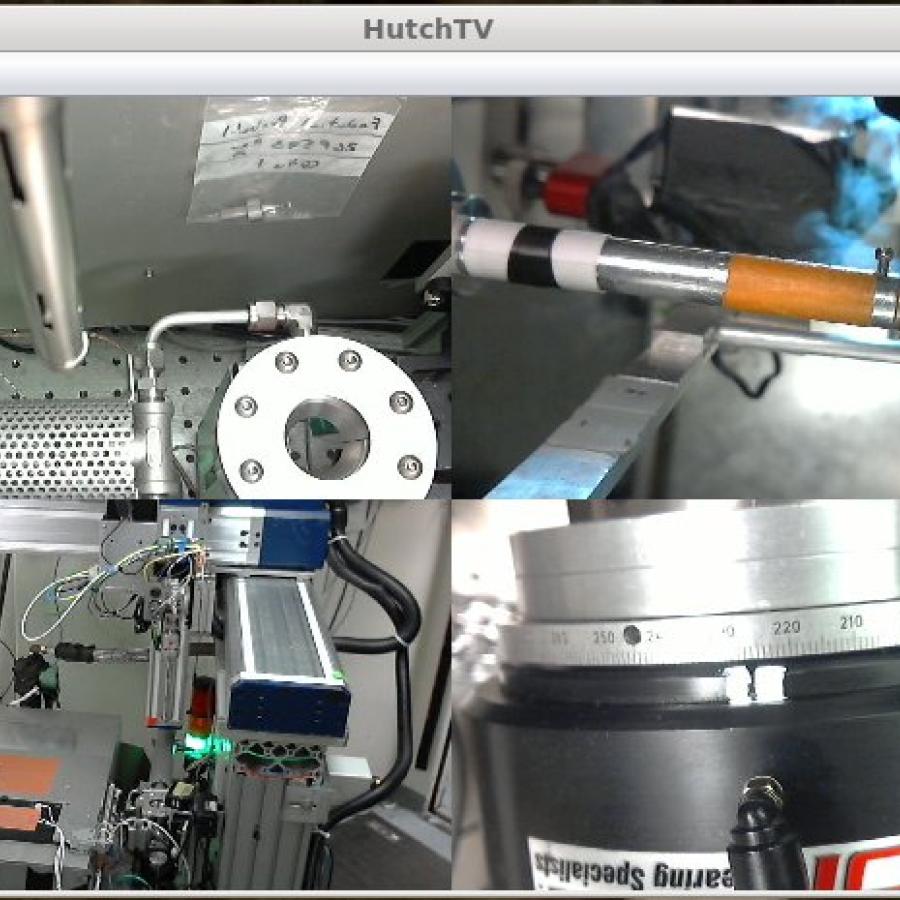 Webcams for automounter use

MacCHESS has positioned several webcams in the hutch to help you track automounter operations.