FMB (the Functional Materials Beamline) is a part of the Materials Solutions Network at CHESS (MSN-C). Research at MSN-C is funded by the Air Force Research Lab (AFRL). Louisa Smieska, Staff Scientist for FMB, sat down with us to discuss FMB and its capabilities in detail. Louisa started her research at CHESS in 2014 and joined the staff in 2017.

What truly distinguishes FMB is the beamline’s flexibility. There are four areas, each with versatility within them, that can be manipulated at FMB to create a wide array of experimental capabilities. 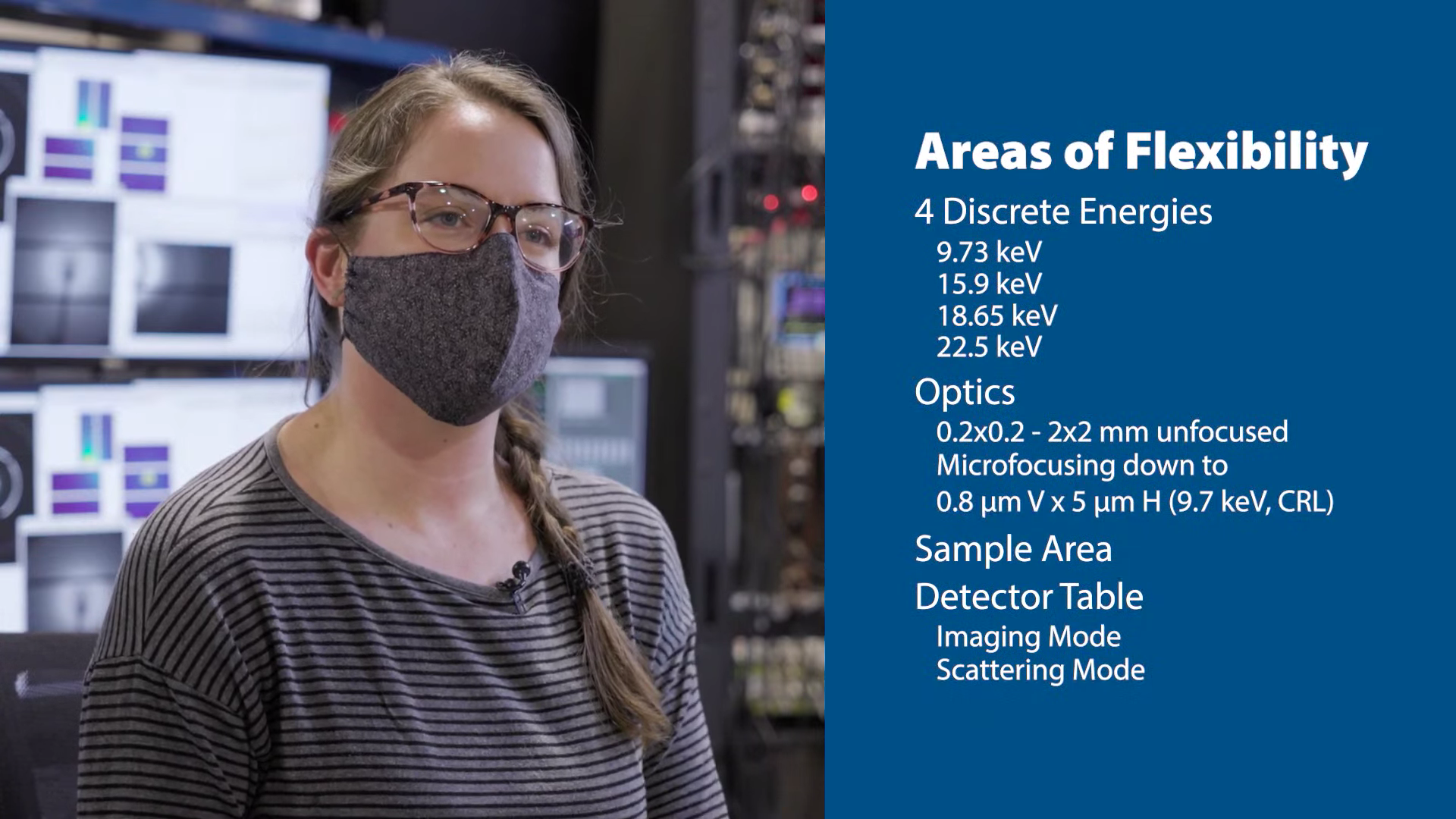 FMB has the capability to switch between four different energies: 9.7, 15.8, 18.6 and 22.5 keV. This ability to easily “hop” between energies distinguishes it from all the other beamlines at CHESS, where changing energies is a much bigger task. The relative ease of making these several-keV energy changes enables FMB to do experiments using four different energies in a single week.

Another area of flexibility is in FMB’s optics. The upstream optics at FMB allow researchers to choose between a larger, 2x2 mm beam, down to a focused beam of just a couple microns (0.8 μm vertical by 5 μm horizontal at 9.7 keV with a set of compound refractive lenses). This ability to adjust beam size allows researchers a wide range in the size of samples they want to illuminate.

The third area of flexibility for FMB is the sample area itself, which allows researchers to bring their own complicated in situ setups. FMB has hosted everything from lasers, robotic stages, diamond anvil cells, temperature and tensile stages, and 3D printers down to micro-focused sample stages.

At FMB we have a special emphasis on doing in situ experiments - we can look at processes happening in real time. That includes not just 3D printing - looking at the material coming out of the nozzle or flowing onto the print bed - but that also includes things like heating materials, pulling on materials, laser annealing, solution mixing all sorts of things can be stuck in the beamline and we can look at dynamic processes in real time.”

Finally, FMB’s detector table has the ability to switch between two experimental modes: imaging and scattering. Imaging is similar to the radiography performed at a dentist or doctor’s office, and uses a larger beam to produce videos of dynamic processes or computed tomography (3D reconstruction of objects). The scattering mode allows for simultaneous wide- and small-angle x-ray scattering.

With all the flexibility provided at FMB, the simultaneous SAXS/WAXS mode can be used with either a large or microfocused beam. “What’s powerful about that” according to Smieska, “is that we can scan the samples through the beam to generate maps of different length scales within your samples. Being able to map out crystalline phases and orientations in your sample can tell you a lot about your sample's microscale structure. And all of that can happen with a couple of micron resolution on a millimeter-length scale.”

The wide-angle scattering is particularly useful for looking at long-range ordering in less crystalline or semicrystalline materials, such as the lightweight composites that the Air Force is interested in.

The Air Force is particularly interested in the discovery of next-generation materials and translating those materials reliably into industrial processes. FMB contributes to this goal by characterizing materials at both the micro and macro scale, from millimeter to meter. Research at FMB primarily focuses on light weight, or low-z, materials such as polymers and composites with additives like nanoclays and carbon fibers. Many of those materials are relevant to cutting-edge additive manufacturing.

Additive manufacturing, also known as 3D printing, has potential to provide the Air Force with the ability to manufacture new materials and to provide flexibility in creating components.

FMB works toward this potential in a few ways. Researchers can look at the in situ process of printing - imaging the materials as they’re being printed. They can also bring in parts that have already been printed and let FMB characterize those by examining their microstructural properties. The goal is to relate the fabrication conditions to the macroscopic properties of parts and how they behave in real-world contexts.

FMB also supports groups who are interested in automatic materials discovery. Previous researchers have brought in solution-mixing robots in order to study a solution’s properties as it’s being created. Another group is currently working with a complex laser annealing setup, where oxides are annealed in situ and their diffraction patterns are used to study which crystalline phases are present. The whole setup can be controlled through autonomous exploration: a computer across campus decides where on a wafer to point the laser next and under what conditions.

Experiments such as the autonomous exploration setup are just one example of the remote capabilities of the Functional Materials Beamline. FMB’s standard SAXS/WAXS mode is extremely compatible with remote operation.

“We’ve designed these special sample holders where we can send them to users, they can fill them with their samples, and send them back to us and it’s really easy for anybody to just attach this sample holder to the right mount and pop it on the beamline,” says Smieska. Users don’t need to have had any special training in order to mount their samples on these holders, and the kinematic mounts ensure that the sample will end up in the right place every time Smieska or her colleagues load a new sample.

Any researcher who is running experiments remotely at FMB is able to log in to the station’s computer to collect data while simultaneously logging in to FMB’s analysis computer. This allows researchers to collect data, run scans, and look at process data as it’s being collected. “It’s almost as if they’re sitting here at the beamline,” she says.

The future at FMB will revolve around this ease of access for researchers. FMB is fairly new, with only a year and a half since its inception. “Most of our efforts over the last year and a half have been towards really improving our techniques and making them excellent, and now the next step is to make them even easier to use.” In the near future, Smieska hopes to be able to streamline the transitions between all of the flexible components of the beamline. Recent improvements have been made to certain components, such as being able to translate the detector table side-to-side, allowing simple transitions between SAX/WAXS and 2D imaging. All it takes is one simple command to move the entire table, allowing researchers to change their whole in situ measurement without changing anything else. Future plans involve similar improvements to access such as improving camera views of samples for remote users.

The research taking place at FMB is funded by the Department of Defense and the Air Force, but it’s still relevant to everyone. Smieaska explained, “all of this work that we're doing on 3D printing for components for aircraft - you can imagine that lighter weight components for commercial airlines are going to be just as important for the general public and for industry.” Lighter-weight components are valuable to the Air Force, but will also be valuable to commercial airlines, contributing to lighter-weight planes and greater fuel efficiency. That’s just one example of the beamline’s broader impacts.

In addition to making lighter-weight components, researching 3D-printed materials can open a world of possibilities for the creation of components. The ease of manufacturing provided by 3D printing could allow the Air Force to reliably and consistently make replacement parts while they’re away from a base, at sea, or even, Smieska imagines, in space.

For Smieska, and for CHESS, working with the AFRL is very rewarding. “It is such a great team,” Smieska delights. “Everybody's really invested in solving these materials problems and we work together really well and it’s a really collegial environment...the people are terrific!”