High pressure cryocooling (Hi-P cryo) is a crystal handling technique that can often yield high quality diffraction from cryocooled crystals (1). However, it is NOT a magic bullet. To see whether Hi-P cryo will help you, please read the information below and complete the checklist that follows. 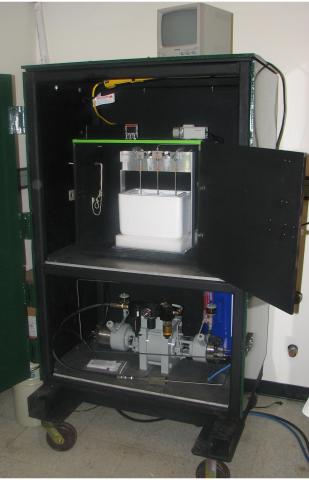 Hi-P cryo is worth trying if you have crystals that diffract well at room temperature, but have problems when cryocooled by normal means. These problems include degraded diffraction quality of crystals cryocooled in the usual way (i. e. with added cryprotectant), as well as inability to find any suitable cryoprotectant after exhaustive search. Hi-P cryo has been is gaining attention and has been successfully implemented at several facilities (2, 3), aside from Cornell and CHESS.

Hi-P cryo will not generally make crystals that diffract poorly at room temperature diffract better. If your crystals do not diffract well to begin with, we do not advise trying to Hi-P cool them.

In a typical Hi-P cryo experiment, the crystals are coated with an oil, such as Hampton Paratone oil. The crystal is then picked up in a cryoloop with a minimal oil droplet, pressurized to 2000 atmospheres in helium gas and cryocooled while at high pressure. The pressure is then released; as long as the crystals are kept cold they can be handled, and diffraction data collected from them, at room pressure, just as a normal cryocooled crystal. The crystals will irreversibly degrade if warmed above about 130k.

Routine Hi-P cryo has limitations: The crystals must be capable of being transferred into oil. Problematic situations that argue against Hi-P cryo include crystals that are degraded by oil, or are unusually delicate, or simply too small (less than about 100 microns across) to be easily handled.

Although Hi-P cryo is most often used for crystals that have problems with routine cryocooling, there are other specialized applications. These include use of Hi-P cryo to produce Xe or Kr derivatized crystals and to induce repacking of virus crystals. Methods that do not use oil coating have been developed, though these are not routine. Users interested in these more specialized applications are advised to consult the literature (1-14) and then to contact us for further discussions.