Driving up Campus Road in the afternoon, you can see many varsity and club athletes practicing on Alumni Fields. But 40 feet underneath them and half a mile in circumference sits the Cornell High Energy Synchrotron Source. 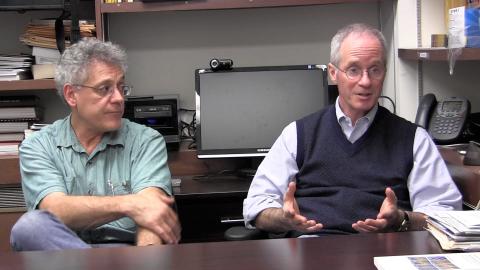 CHESS is a circular particle accelerator that produces synchrotron radiation in the form of high-intensity, high-energy x-rays. These x-ray beams are instrumental for research in a wide variety of fields, including materials science, biology, and physics. The CHESS facility is connected with the Cornell Electron Storage Ring, which stores the beams of light accelerated by the synchrotron.

The Wilson Synchrotron Lab houses both CESR and CHESS. The lab is named after Robert R. Wilson, a late Prof. Emeritus of physics who is known for his work as a group leader in the Manhattan Project and for being the first director of the Fermi National Accelerator Laboratory. In his 20 years at the Laboratory of Nuclear Studies, Wilson’s research contributed to the construction of CESR.

CESR was completed in 1979 and was the highest luminosity electron-positron collider in the world during the 1990s, according to the Laboratory for Elementary Particle Physics. It was used to accelerate, store and collide electrons and positrons at speeds near the speed of light, according to Lora Hine director of educational programs at the Wilson Synchrotron Lab.

CHESS itself was built in three stages over three decades. Construction began in 1979, the same year CESR was completed, on the CHESS West laboratory. This part of the synchrotron includes three beam lines, or three different paths that particles can be accelerated along.

In 1989, Cornell built CHESS East with funds from the National Institutes of Health. CHESS East added two beam lines and a biohazards containment facility. The final stage began in 1999, when CHESS built the Gline, which added more x-ray stations to the facility.

In July 2006, CHESS merged with LEPP to form the Cornell Laboratory for Accelerator-based Sciences and Education. CLASSE develops and provides facilities needed for particle physics research.

This summer, Prof. Sol Gruner, atomic and solid state physics, stepped down after serving as the director of CHESS for 17 years. He handed the position to Prof. Joel Brock, applied and engineering physics.

Since their construction, CHESS and CESR have remained state-of-the-art accelerator facilities. According to Gruner, CESR serves as both an experimental facility and a user facility. About a quarter of the reserach time for this facility is exclusively reserved for accelerator physics experiments run by Cornell faculty and students.

When CESR is not dedicated to accelerator physics research, it provides the x-ray beams used in CHESS experiments. The x-ray radiation is produced by the synchrotron, and at select places, captured for experimental use.

“In other facilities, this radiation would be wasted, but we capture it for user experiments at CHESS,” Hine said.

CHESS is an open user facility funded by the National Science Foundation. Researchers from anywhere in the world can submit proposals to use the x-ray beams. Researchers are allowed up to 36 hours to run experiments free of charge, according to Hine.

Every year, at least 400 scientists and research students conduct experiments and collect data using these xrays, according to Gruner. About 70 percent of the people who use this service come from outside of Cornell.

This method is commonly used among biologists. According to Brock, it is especially critical in the development of antiviral drugs, since scientists must first understand the structure of viruses before drugs can be designed to effectively target them.

CHESS has a long history with protein crystallography. According to Brock, from 1991 to 1993, CHESS researchers developed the x-ray detectors that are still currently used for this technique.

“Detector technology that was first developed here at CHESS has resulted in detectors that have been used to collect over 60 percent of all the x-ray protein structures found in the Protein Data Bank,” Gruner said. “It’s an ex­ample of how we develop a technology and create a new capability, and it spreads all over the world.”

The Macromolecular Dif­frac­tion Facility at CHESS, also called MacCHESS, uses crystallography techniques for structural biology research, and remains a large portion of the research conducted at CHESS. According to Brock, NIH funds MacCHESS as a open user facility where scientists can solve structures of biological macromolecules and develop new tools for structural biology research.This NIH grant is separate from that provided by NSF grant, which supports CHESS.

In an interdisciplinary fashion, CHESS also supports a variety of other research projects. For example, in the past few years, art historians have used the x-ray beams to scan famous artworks. These x-ray beams do not damage the original paintings and can determine what, if anything, is underneath the top layer of paint.

Material scientists are also frequent users of CHESS facilities. Their experiments include studying the way materials such as jet plane wings degrade over time on an atomic scale in order to better predict structural failures. Researchers have also used CHESS to use supersonic beams of organic material to create efficient semiconductors.

CHESS is not only dedicated to providing quality x-ray beams to researchers but also devoted to developing new technologies and techniques.

“Our particular niche is developing new methods and solving hard problems. The technology we develop is very successfully transferred to other laboratories all around the world, implemented on large scales,” Brock said. “There’s a huge list of what CHESS has developed: x-ray optics, CCD detectors and better accelerators.”

Numerous researchers at CHESS have been recognized for their innovative work. In 2003, Prof. Roderick MacKinnon, molecular neurobiology and biophysics, Rockefeller University, won a Nobel Prize in chemistry for his research on potassium channels. In 2009, Prof Ada Yonath, structural biology, Weiz­mann Institute of Science, was also awarded a Nobel Prize in chemistry for her work on the structure of ribosomes. According to Gruner, large parts of both of their research were conducted using CHESS facilities.

For the past fifteen years, CHESS has also been developing an Energy Recovery Linear Accelerator that would create more powerful x-ray beams. NSF has funded Cornell with $50 million over ten years to work on prototyping this technology, according to Gruner, the former principal investigator of this project.

The CHESS lab is currently in the middle of upgrading its facilities. According to Brock, the storage ring is being improved and outfitted with new x-ray equipment. The upgrades will increase the spectral brightness and flux of the x-ray beams, providing CHESS with some of the best, most powerful x-ray light in the world.

“It’s going to enable our staff to push the frontier back again,” Brock said. “The most remarkable thing about this facility is the people who work here. They like nothing better than the chance to do something new and remarkable. Nothing makes them happier than telling them to ask ‘what could you do better?’”