While he has never taken any formal courses in "synchrotron beamline science," Jun Young Peter Ko has worked on projects over the past 10 years that were clearly moving him towards expertise in the field. 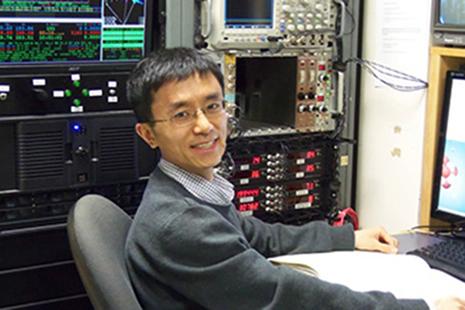 His current position at CHESS is "project scientist." Peter has played a key role in designing a new type of x-ray monochromator that provides uniquely flexible capabilities to focus high photon energy (40-100keV) beams to feed the F2 station. We've highlighted the new hardware capabilities previously [1]. Two critically important aspects of this development were to make it possible for the CHESS F2 station to provide high-intensity, high-energy x-ray beams competitive with other light sources, and also to make possible new in-situ and operando science initiatives at CHESS in structural and energy materials.

Peter majored in chemistry at The University of Western Ontario (London, ON, Canada). He stayed on there for graduate studies, working in the research group of Tsun-Kong (TK) Sham on time-resolved x-ray spectroscopy, culminating with his thesis "X-ray Absorption Fine Structure and X-ray Excited Optical Luminescence Studies of Calcium Compounds." He gained experience as a visiting researcher at Stockholm University (Sweden) and as a visiting user at multiple beamlines at the Canadian Light Source, the Advanced Photon Source (Chicago), and the Synchrotron Radiation Center (Stoughton, WI).

Coming to Cornell, Peter took a post-doctoral position with Joel Brock in the School of Applied and Engineering Physics, supported by the Energy Materials Center at Cornell (emc2). Stationed at CHESS, he supported researchers using the A2 station to perform in-situ and operando x-ray diffraction studies of electrochemical systems, including surface characterization of electrodeposition and catalytic processes. His beamline responsibilities centered around developing experimental capabilities for high energy x-rays, including commission the then-newly received GE large-area detector, which is now a staple 40 cm square detector used at A2 and F2 (CHESS now owns two). At that time, it was clear that CHESS needed a good way to focus intense high-energy wiggler beams, like those available at A2 and F2, and that exploring, adopting and adapting designs in use at other laboratories was a high priority. Peter took on that challenge and developed a prototype double-Laue monochromator which he installed at the hard-bend B-line station for a test during the first CHESS undulator test in 2012.

Peter is proud of commissioning the prototype double-Laue monochromator for several reasons. First, he worked closely with the CHESS engineering and research support staff to configure hardware that fit inside the tight constraints of the test optics box. He installed and tested motors, and was especially gratified to see his first design project of a beamline component come to life. He attests "I never thought I'd be excited to see a little blip beam from the monochromator show up on a small black-and-white TV screen!" Secondly, he had the chance to collaborate with the inventor of the Laue focusing monochromator, Zhong Zhong of NSLS. Finally, by getting his hands on key beamline components, as well as working to commission the prototype monochromator himself, gave him critical experience to refine the next version of the double-Laue design.

Peter's work on that double-Laue x-ray focusing optic was the most critical contribution to CHESS upgrade of the F2 beamline to accommodate high-energy operations. Late in 2012, seeing the success of Peter's prototype, CHESS began planning to replace the entire x-ray optics and renovate the endstation for high-energy diffraction studies. That beamline upgrade project got a boost in funding from the Air Force Research Laboratory (AFRL), coupled to support from emc2. Needing Peter's help full time, CHESS cut short his post-doc with emc2 and appointed him as project scientist to concentrate on designing, building and commissioning the new focusing optics for the F2 beamline. With Peter’s focused effort, that project moved along at lightning speed, and by September 2013 Peter was commissioning version two of the double-Laue monochromator. This system went far beyond the prototype in that the wiggler beam at F2 has such high white beam power that the silicon crystal would melt if exposed [1]. Peter worked closely with engineers Jim Savino, Alan Pauling, Aaron Lyndaker, Ben Oswald and Eric Edwards to design a crystal bender unit that cooled the first crystal down to liquid nitrogen temperatures ( < -180C). At that temperature range, the thermal conductivity of the crystal is very high and the thermal distortion caused by the filtered synchrotron beam is minimized.

Peter adds "working on the F2 upgrade project was truly fascinating. Just like the prototype project, there were a great deal of challenges along the way, but at the end of the day, I felt a great sense of achievement when my commissioning results showed that the monochromator was working the way it was intended. This project would not have been possible without professionalism and diligence from the entire project team consisting of scientists and technical staff; I am grateful to them for playing an important role in getting the project accomplished."

The double-Laue monochromator design of Peter's is the first of its kind with both cryogenic cooling and remote fully adjustable degrees of freedom for bending, twisting, and focusing. Working in a fast-paced environment, working closely with engineering and scientific staff, and using his own hands to build and test the hardware all helped Peter develop x-ray optics expertise and commission a new optic on an extraordinarily quick schedule. His continuing challenge is to now think about and design an optic that can withstand an even-higher x-ray power density that the new CHESS Compact Undulator will deliver to the F2 beamline in the near future. 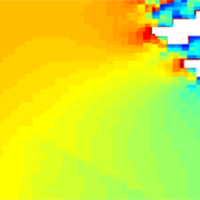 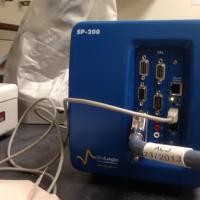