For most of CHESS’s history, it was not possible to use undulator insertion devices. The reason for this was that in order to counter-rotate electrons and positrons in the same storage ring there had to be a “pretzel” orbit that caused the two particle beams to avoid parasitic crossings (Fig. 1), but also not go through the centers of potential undulator sources. 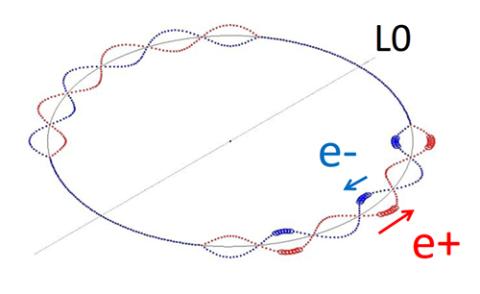 Figure 1: Schematic of electrons and positrons in a new “arc pretzel” orbit whereby particles travel on-axis along the middle of undulators at CHESS beamlines (in “L0”) but at different times, so as to avoid collisions.

The two particle beams were the hallmark of the successful high-energy physics colliding beam program, but with those experiments finishing in 2008 x-ray production for CHESS became the primary mission of the laboratory. At that point source stability and flexibility became the top accelerator priority, driving the development of top-off injection that keeps the positron current constant at 200 milliamperes as well as a new slow-orbit feedback system that reduced x-ray beam source drifts to fewer than 10 microns. All CHESS users came to appreciate constant current in the machine because it helps eliminate warm-up drifts of beam positions, variations in heat loads on x-ray optics, and injection instability, and also reduces jitter and wander in many experimental and environmental variables (i.e. energy, flux, beam footprint). The success of those efforts came in the form of users routinely reporting “exceptionally stable running” conditions and via beam-position monitor upgrades now track motion in microns over the course of a week [1,2].

So why change anything? Brighter x-ray beams, of course.

That goal required replacing wiggler sources with undulators and lowering the emittance of the storage ring. This goal came with many constraints. First, the storage ring would need particles beams running through the central axis of the undulators – that is, no pretzel in the CHESS source areas. Second, we’d have to create undulator sources with x-ray beams coming out of both ends – x-ray beams from electrons feeding the A-line stations and positron beams illuminating G-line stations. The storage ring has modest length straight sections that had previously accommodated only a single wiggler insertion device. The fan of x-rays from the wigglers was sufficiently wide that the beam could be split to feed multiple x-ray endstations. Within the existing 3.5 meter straight sections we’d have to fit two canted undulator sources for independent tuning at A and G-line endstations. And third, the lengths of CHESS beamlines were so short that x-ray heat loading on beamline components would require significant redesign and replacement of apertures, beamstops, beam position monitors and optics.

A solution for the on-axis beams through undulators was solved when accelerator physicist Alexander Temnykh recalled that during the days of colliding beam physics, special storage ring lattices did in fact have pretzels outside the collision area, but particle beams essentially on-axis through the interaction region and particle detector. He worked closely with scientist Suntao Wang to develop means to adjust the bunch pattern and timing so that electrons and positrons could “take turns” travelling through the CHESS undulators at different times. Thus no collisions but on-axis source points. Figure 1 shows a schematic representation of the machine configuration so developed.

Developing undulators making efficient use of short straight sections was another innovation from Temnykh. The CHESS Compact Undulator (CCU) program was a natural outgrowth from the Delta undulator devices developed for an ERL source, which made use of small permanent magnets with innovative clamping and fixed-gap tuning methods [3]. Both programs catalyzed developing in-house capabilities to manufacture and measure precise magnetic field mapping [4,5]. The bench provides Hall sensor positioning at the level of 1 micron, and magnetic field measurement errors (normalized) ~5x10-4 or better. These result in undulator field optical phase errors resolution of ~ 0.2 deg. This undulator program has had successes inside and out: Temnykh has collaborated with colleagues at SLAC to design a Delta undulator as a helical light “afterburner” for LCLS, and, in parallel, just like Delta designs, planar CCUs for CHESS have been designed, built, tested and now commercially produced [3,6,7].

The CHESS community has been hearing over the past two years about progress building and testing two new prototype undulators - a successful test of a 1 meter in-vacuum CCU in 2012 [8,9], and a 0.3 meter out-of-vacuum undulator tested in 2013. Both were built by lead engineer Aaron Lyndaker. During September 2013 the out-of-vacuum version was perfected and tested, including a thin wall vacuum chamber, a new compact sliding joint, and a new vacuum chamber taper design. Based on the success of these tests, CHESS decided to begin a program to replace existing wiggler sources with CCUs. CHESS worked with KYMA to commercially produce two CCUs in time for the summer 2014. During that down period, two 1.5 meter canted undulators replaced the current west wiggler.

To accommodate the very high heat load of these new undulators required a complete rebuild of the A beamline and station optics. During summer 2014 the front-end was entirely rebuilt, and is now windowless from the storage ring all the way to the x-ray endstations. X-ray optics for A-line now use water-cooled diamonds, but will move to cryogenically-cooled silicon as soon as optics enclosures are ready. The A1 side station utilized a Laue diamond optic that made use of the clamp and heat sinking technology developed by SPring8 [10]. The old swappable A2 monochromators have been retired, and replaced by a dedicated double-bounce diamond system behind a removable white-beam vertical-focus mirror. [Jacob Ruff discusses commissioning new optics in an adjoining article.] The water-cooled multilayer optics at G-line were not changed with this upgrade because the undulator source was moved further than the previous wiggler and expected performance of the white-beam mirror and optics was good. Incremental improvements and refinements are expected as we raise storage ring performance and experimental needs for better focusing emerge.

Along with a continuous program of monitoring and improvement on A and G-lines, we are now planning to replace the F-line wiggler with two canted undulators in the near future. This opens opportunities to redesign and expand the technical and science capabilities of all three x-rays stations – F1, F2 and F3. Our initial project planning includes two canted CCUs that will improve protein micro-crystallography and BioSAXS at F1, improve focusing for the high-energy structural and energy materials programs at F2, and add a new independently tunable spectroscopy and microfocus imaging end station to replace the current bend-magnet-fed F3 station. The CHESS staff are eager to develop these new capabilities, and welcome input and ideas from CHESS users.