One of the cool things about nanoparticles is also what makes them so difficult to work with: the fact that their properties are dependent on their size. 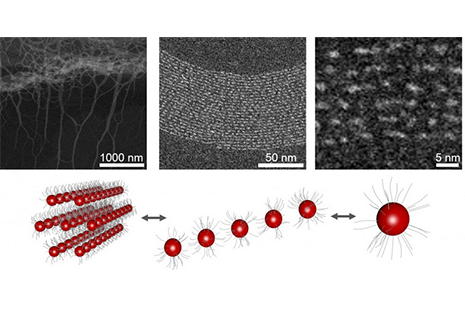 A critical challenge in translating nanomaterials from the laboratory into commercial applications, such as lighting or optical memory storage, is making a batch of nanoparticles all the same size. Two Cornell research groups have joined forces to lay out a solution for this issue.

Their paper, “Mesophase Formation Stabilizes High-Purity Magic-Sized Clusters,” published online Jan. 27 in the Journal of the American Chemical Society, and will be on a cover of the March 14 print edition. Lead authors are Curtis Williamson, doctoral student in both the Robinson and Hanrath groups, and Douglas Nevers, doctoral student in the Hanrath Group. Lena Kourkoutis, assistant professor of applied and engineering physics, also contributed.

The conventional wisdom regarding magic-sized clusters has been that their stability derives from the precise arrangement of the inorganic structures that surround them and prevent attachment of more atoms. Recent studies have disputed that theory and suggest that organic surfactants (surface active agents) play a more central role during the formation of these nanoparticle clusters.

According to Robinson, associate professor of materials science and engineering, getting these particles to all be the same size has been a “guessing game.” His group’s work proposes to take the guesswork out of it.

The key: At a specific temperature and at ultra-high concentrations (10 times higher than usual), the synthesis both promotes magic-sized cluster formation and suppresses the creation of larger-sized nanoparticles. But the synthesis also does something unexpected, which could be key to commercialization: The clusters reach a certain size and basically stop growing.

“It’s as if you’re producing a cluster and then taking it out of the flask, putting it on the shelf and then creating another one,” Robinson said. “They no longer continue to grow. They’re popping into existence, growing to an exact size and then taking themselves out of the synthetic product, so they’re isolated.”

This paper builds on work the group did in 2015, in which they proved that high concentration of the precursors during synthesis resulted in robust, scalable and size-focused nanoparticles. Robinson said that during that work, Nevers and Williamson noticed turbidity in the pot when the mixture reached the nucleation (phase transition) point.

“It looked like milk forming,” Robinson said. “There were fibers forming [made up of clusters and organics]. Normally there are color changes in nanoparticle synthesis, but they were quick to realize something very different was happening.”

Once formed, the fiber structure is so extensive that the clusters achieve an organic-inorganic mesophase that stabilizes the clusters by isolating them in a hexagonal matrix. Small-angle and wide-angle X-ray scattering confirmed the finding.

Robinson said the availability of the X-ray beams at CHESS was invaluable.

“This work wouldn’t have been possible without CHESS,” he said. “They have a really great team there. We were able to analyze the material in situ [as the particles were being grown]. They shot it with two different [X-ray] beams and collected a large fraction of the scattered rays so that we could see how the atoms were symmetrically arranged, and at the same time see how these things form.”

Also contributing were Benjamin Savitzky, graduate student in the Kourkoutis lab, and Ido Hadar and Uri Banin of the Hebrew University of Jerusalem.

This work was supported by grants from the National Science Foundation, and made use of both CHESS and the Cornell Center for Materials Research Shared Facilities, which are supported by the NSF. 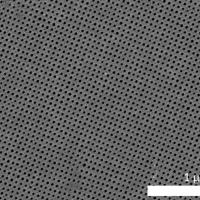 Determination of bond strengths in non-woven fabrics: A combined experimental and computational approach 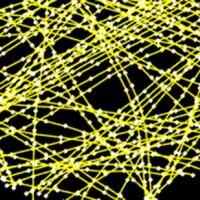