Daguerreotypes, the earliest form of commercial photography, are made of silver-mercury image particles on silver-coated copper plates. These exquisitely detailed images can suffer from tarnish of the silver over time, obscuring the original photograph. 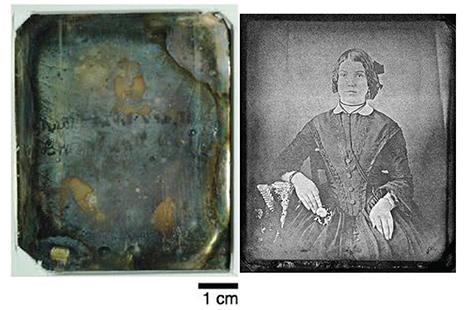 A team of researchers from the University of Western Ontario, the National Gallery of Canada, and the Canadian Light Source, using facilities at CHESS, have discovered that in at least some cases, the images of even severely tarnished daguerreotypes can be recovered. The team employed scanning x-ray fluorescence (XRF) to determine the elemental composition of the daguerreotype surface. Evidently, the mercury distribution alone, as retrieved by scanning XRF, closely reproduces the original image, and is not affected by some forms of degradation tarnishing. The method does not touch the fragile surface of the object or cause any detectable alteration, which is essential when dealing with cultural heritage objects.

Daguerreotypes are challenging to study with XRF, in part because the XRF signal from the copper and silver plate overwhelms that generated by the tiny image particles on the surface. Recent advances in detector technology, such as the CHESS Maia detector used for this study, have greatly improved the ability to retrieve such small relative signals. Using the Maia detector and a small x-ray spot size, the researchers were able to map the distribution of mercury on a daguerreotype with exceptionally high sensitivity and speed. The team discovered that despite the badly damaged appearance of a tarnished daguerreotype, mercury was still retained where the image was originally formed, revealing portraits that had lain unseen for decades.

Daguerreotypes represent some of the earliest photographic images in history. The ability to recover information about the original images in tarnished daguerreotypes without any potentially risky cleaning processes will permit investigation of collections that have gone unstudied due to their poor condition.

This research was supported by the National Science and Engineering Research Council of Canada, the Canadian Foundation for Innovation, Canada Research Chairs (T.K.S.) and the Ontario Ministry of Innovation. Further support for interdisciplinary research was provided by The Dean's Office at The University of Western Ontario, Faculty of Science. Some preliminary synchrotron experiments were performed at the Canadian Light Source, which is supported by NSERC, NRC, CIHR and the University of Saskatchewan.