Based on research spanning more than 15 years at CHESS and at HASYLAB, Christine M. Papadakis at the Technical University of Munich (TUM), Germany, Dorthe Posselt at Roskilde University, Denmark, and CHESS staff scientist Detlef Smilgies published a comprehensive review on in-situ solvent vapor annealing processes in block copolymers, based on their own work and important contributions by other groups [1]. 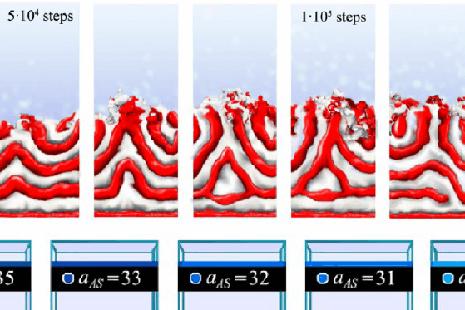 They are joined by their theory collaborator Igor I. Potemkin (Lomonosov Moscow State University) and former Papadakis postdoc Jianqi Zhang who is now at the National Center of Nanoscience and Technology in Beijing, as well as current postdoc Anatoly Berezkin (TUM).

One of the most surprising results was the observation of an instability on a stack of parallel lamellae upon exposure to solvent vapor. There was a dramatic angular widening of the peak associated with parallel lamellae followed by sharpening in the azimuthal and radial direction. This was interpreted by the film becoming unstable at a certain degree of swelling, and forming new lamellae [3]. This way each chain gets more interfacial area at the lamellar interface and can assume a less stretched molecular conformation. Such a transient restructuring process can only be observed in-situ and in real time, highlighting the power of the GISAXS method.

The focus of the collaborators is on the polymer physics that rules the self-organization processes in block copolymer systems. After spin coating the film displayed a mixed orientation of parallel and perpendicular lamellae. Upon solvent vapor annealing the two types of lamellae behaved differently: Perpendicular lamellae re-oriented to the parallel configuration while parallel lamellae which are already close to the equilibrium configuration stayed put. Overall five different annealing regimes were observed with different scaling behavior of the film thickness [4].

The interpretation of the experimental observations was recently supported by supercomputer simulations by Igor Potemkin’s group using the dissipative particle dynamics method. The simulation could reproduce the adding of additional lamellae during swelling of parallel lamellae with a free surface. Perpendicular lamellae, which are the equilibrium structure at higher molecular weight, are much more topologically constrained. The perpendicular lamellae shrink, as chains assume a more coiled configuration which can be accommodated by tilting of the lamellar stack, consistent with the experimental observations.