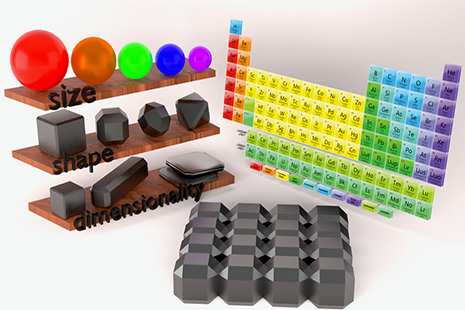 Figure 1. The “periodic table” of nanocrystal superlattices. Nanocrystals can be made from most elements in the periodic table. In addition, their size, shape and dimensionality is controlled by the synthesis. Finally superlattices with different symmetries can be made by exploiting shape and dimensionality as well as processing parameters. (Image by Tobias Hanrath, Cornell)

The formation of superlattices is a fascinating mesoscale phenomenon governed by the interplay of a range of thermodynamic and kinetic factors. Long-time collaborators Detlef Smilgies, CHESS, and Tobias Hanrath, Chemical and Biomolecular Engineering, have recently summarized the role of time-resolved X-ray scattering techniques in combination with in-situ sample environments to gain unique insights into the relevant processes. Their EPL Focus Article was recently published in a special issue on superlattice formation, edited by Marie-Paule Pileni [1].

A variety of factors influence the assembly. First of all there are the nanoparticles themselves: their size variation, their shape, and their ligand coverage influence which superlattice symmetries are formed. A spectacular example has been the self-assembly of lead sulfide and lead selenide nanocrystals: These spheroidal nanocrystals have well defined facets formed by (100) and (111) crystallographic planes of the inorganic cores which form cuboctrahedra. Initially these nanocrystals form the expected FCC superlattice, but as solvent further evaporates and particles move closer together, the lattice symmetry changes to body-centered tetragonal and finally to BCC [2,3]. This transition is accompanied by increasing orientational ordering of particles relative to each other. The reason for this peculiar behavior seems to lie in the ligand-ligand and solvent-ligand interactions as superlattices dry. Due to the facetting of the particles the ligand density around the particle is inhomogeneous; in particular at edges and corners there is sterically not enough space to anchor ligands at the same density as on the facets.  As particles move closer to each other this anisotropy becomes more pronounced and leads to orientational ordering and superlattice symmetry change.

Another factor is the type of solvent and the evaporation time. If solvents with high vapor pressure are used, such as chloroform or hexane, assemblies are best formed in a closed chamber with solvent reservoir and a controlled evaporation rate [2,3]. Other solvents such as toluene have a lower vapor pressure that is more compatible with the self-assembly kinetics. It has even been possible in some cases to “melt” and reassemble superlattice films by exposing them to saturated solvent vapor and then slowly drying them [4]; this reversible phase change is known as the Kirkwood-Alder transition.

For applications of superlattices it is often desirable to reduce the spacing beween particles even more, to improve charge transport, in particular when using particles as absorbers in solar cells. A fascinating method to overcome this limitation has been developed by the groups of Hanrath at Cornell and Vanmaekelbergh in Belgium: if nanocrystals are dispersed on the liquid surface of ethylene glycol, a non-solvent, they readily arrange into dense monlayer. If then a reactant is injected into the subphase that removes ligands from the cores, particles can get close enough to form necks which connect either (100) or (111) facets to each other. These confined-but-connected nanocrystals form a new class of nanomaterials that are promising for electronics applications [5]. However, the self-assembly process needs to be further refined to bring out subtle electronic effects such as the formation of minibands; currently this is hampered by too high a defect density, which is often due to missing particles in an otherwise highly ordered layer.

Nanocrystals offer a lot of potential to create materials by design with novel electronic, optical, and magnetic properties. In-situ and in-operando studies with x-ray scattering methods can pave the pathway, how to get there. 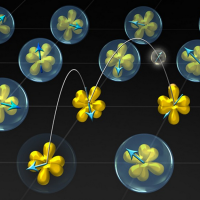 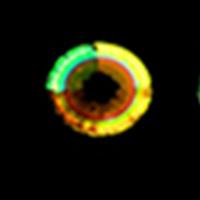