A major cause for the failure of widely used technologies, especially electronics, is the slow movement of atoms away from their designed positions. In nanotechnology, the drift of matter over only a few nanometers can jeopardize the performance of a device. Although thermodynamics explains why such drift occurs, only direct measurements of the speed of diffusive processes can determine how the atoms move on short length scales. 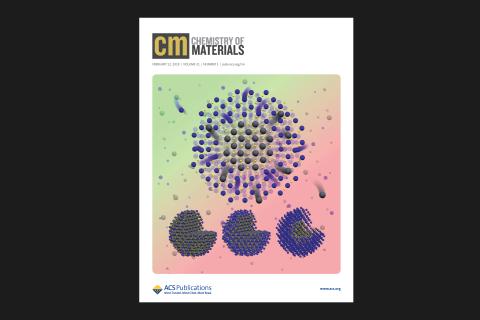 Future electronic and optical materials based on colloidal semiconductor nanocrystals will depend upon the stability of these materials under large thermodynamic driving forces for their dissolution, coalescence, or intermixing.

Using synchrotron X-ray diffraction (XRD), the Richard Robinson group (Cornell University) directly probed the structure and reaction kinetics of lead sulfide (PbS) nanocrystals (NCs) undergoing cationic exchange to cadmium sulfide (CdS). This system was an ideal candidate for using XRD to study phase transformation kinetics, as the PbS NC precursors have a simple structure and a well-established synthetic chemistry.  Also, the cationic exchange kinetics are slow enough to allow for direct interrogation by XRD. For this experiment, the group characterized the mechanism of the transformation, and they measured how quickly ions could diffuse through a shell only 1-2 nm thick around the nanoparticle core.

Via synchrotron XRD characterization, the Robinson group discovered, surprisingly, that during the PbS to CdS NC transformation the atoms practically flew through the shell, diffusing up to 10,000 times faster than would be expected from extrapolating from diffusion rate measurements at high temperatures. One possible mechanism is through defects: although the energies needed to create the defects responsible for mediating mass transport are comparable to those in bulk measurements, the absolute defect concentration in these nanoparticle solids is likely much higher than that implied from high-temperature measurements. The group also found that the reaction proceeds in three stages with complex intermediates: (1) surface exchange to form a metastable rocksalt CdS shell, (2) crystallization of this shell to zincblende, and (3) diffusive transport ions through the completed shell.

The ultra-fast solid-state diffusion at the nanoscale shows that nanoparticles are far more structurally dynamic and imperfect objects (e.g., defects) than that suggested by the large-scale properties of their parent bulk materials.

Synchrotron X-rays can be used to study reaction kinetics of nanoparticles.