Micronutrient deficiency, sometimes called the “hidden hunger,” causes severe health problems in hundreds of millions of people worldwide, and is particularly damaging to children, in whom it can impair both physical and cognitive development.  Biofortification is one of the most promising tools available for alleviating this problem, but is a multifaceted challenge involving not only creating nutrient-rich crop varieties, but also ensuring bioavailability of these nutrients, protecting against increased uptake of toxins such as cadmium, and adoption by affected populations. 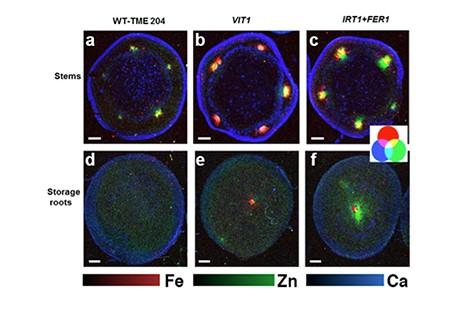 In an open-access paper published this week in Nature Biotechnology, a team led by researchers at the Donald Danforth Center for Plant Science in St. Louis reports successful development of an iron- and zinc- fortified variety of cassava, representing a substantial leap forward in this effort. The interdisciplinary effort reports that the new variety accumulates 7-18 times greater iron and 3-10 times greater zinc than controls, and includes detailed evaluation of the accessibility of these nutrients after being prepared for food. Adoption of this cassava variety could provide up to half of the iron and two-thirds of the zinc required for women and children among particular West African populations who rely on cassava for a substantial fraction of overall diet.

The paper reports a large variety of scientific experiments and characterization techniques designed to elucidate the groups’ results. X-ray fluorescence microscopy at CHESS was employed to corroborate the overall increase in micronutrient uptake as well as understand the localization of iron, zinc and other micronutrients (see figure). To do so effectively, the CHESS Maia detector was employed, enabling researchers to employ high scan speed and thus measure 2-4 distinct samples from each of four genetically distinct plants. Understanding nutrient localization – e.g. whether nutrients are in the edible portion of the plant – relates both to the bioavailability of these nutrients as well as the mechanisms of nutrient transport.

Successful demonstration of biofortified cassava is a critical step in permitting its adoption among small farmers in regions and among populations most affected by iron and zinc deficiency. Such adoption, in turn, is one of several important strategies to enable improved human health and, especially, physical and cognitive development among children.