Living cells control input and output from the cell to the surrounding medium with highly specific channels formed by membrane proteins. In order to make this specificity available to membranes used in industrial separation processes, Suzana Nunes’ group at King Abdullah University of Science and Technology explored the behavior of block copolymers with a model peptide block. 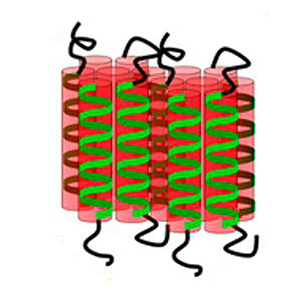 The study showed that polymers and biological macromolecules can be combined and form highly regular structures as known for simple block copolymers. Potential applications lie in biotechnology and medicine for separation of specific targets for purification or medical diagnosis as well as concentration of analytes via dialysis.

Fig. 1.  Left: Block copolymer membrane containing a protein block (green spirals) that forms a functionalized channel. Right: integrated GISAXS intensities showing the time-evolution of the ordering in the top skin layer. At 120 sec after coating the highest ordering in the skin layer is found.

The peptide block copolymer was synthesized in Nikos Hadjichristidis’ lab at KAUST. The peptide block consisted of poly(γ-benzyl-L-glutamate), an amino acid polymer that forms a-helices; the polymer block was standard polystyrene. Nunes group student Burhan Sutisna and postdoc Valentina Musteata applied a number of techniques to characterize block copolymer solutions and thin films, such as solution SAXS, AFM and SEM. Real time in-situ GISAXS studies of membrane formation were performed at CHESS D-line using the D-line blade coating set-up. A variety of polymer block sizes and solvents were studied, with the smallest block copolymer and dioxane as a solvent yielding the best result.

Separation processes are important in the chemical and pharmaceutical industries as well as in biotechnology. By providing membranes with functionalized channels not only separation by size but also by chemical affinity can be achieved with a new generation of highly selective membranes. Combining peptides with a polystyrene block enhances the mechanical stability of such membranes as mandatory for industrial processes.

The self-assembly kinetics of the membrane was characterized with GISAXS at D-line using a blade-coating apparatus developed by staff scientist Detlef Smilgies. The apparatus allows an appropriate coating gap und speed to be chosen by the researchers.

Coating was done in the Landau-Levich regime where a solution layer gets deposited at high coating speed which subsequently dries. In addition the temperature of the substrate can be selected, in order to control the drying kinetics of the coated film. Coating experiments were performed with block copolymers of different sizes and using different solvents. Such time-resolved GISAXS measurements facilitate finding the optimum time for stopping the self- assembly: typically first a well ordered skin layer of 200 nm develops, which gets disordered as soon as the bulk of the film assembles. The quality of the skin layer can by preserved by immersing the polymer film in water at the right time.