Breakdown of the Small-Polaron Hopping Model in Higher-Order Spinels

The authors present an updated “small-polaron hopping model” to include contributions of decoupled pathways for the flow of electrons in spinel oxides. Their work provides a route for custom-tailoring the properties of oxides used in technologies such as fuel cells, batteries, and solar cells. 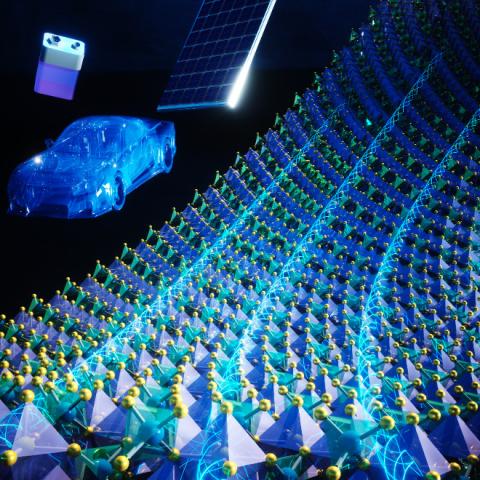 Spinel oxides are ceramics with exciting electronic and electrochemical properties. Spinels have important roles in devices such as batteries and fuel cells, but there are limits to their integration because of their low electronic conductivity. The conventional model to describe charge transport in oxides was developed six decades ago and had not been tested on complex materials such as ternary spinel oxides, and, as a result, impeding the ability to understand and improve the conductivity of oxides. In this work, the scientists systematically studied spinel oxides to highlight the shortcomings of the old model. They show that the electrons flow along “channels” or “conduction pathways” formed by the different cation-types (Mn and Fe) present in the manganese iron oxide system. Further, the charge flow is found to switch from one cation-type to another as the ratio of cations is varied. Based on these findings, the authors present a new model and equation for electronic conductivity which they show can accurately predict the structure-property relationship.

Broader Impacts
Understanding how electrons are conducted can help tune the composition of oxide materials to achieve the highest electronic conductivity and hence improve the energy efficiency of devices such as supercapacitors, fuel cells, and lithium ion batteries.
Why is this important?
The new model presented in this work can help in accurately predicting the properties of the material. As a result, instead of the Edisonian, trial-and-error approach of synthesizing and testing new materials, a more systematic and efficient approach can be used to predict the structure-property relationship.

Need for CHESS Experimental Capabilities
Collaboration with CHESS played a major role in the development of the new model. Kβ x-ray emission spectroscopy (XES) can be used to precisely determine the atomic locations and the oxidation state of the cations.  XES was conducted at ID2A-PIPOXS beamline which used the two-color DAVES spectrometer, enabling rapid switching between collecting Mn and Fe data. The high incident flux at this beamline is suited for thin film samples as evidenced by the high-quality data collected for the 60 nm thick samples.

How was the work funded?
This work was supported in part by the National Science Foundation (NSF) under award number DMR-1809429 and CHE-1507753. This work made use of the Platform for the Accelerated Realization, Analysis, and Discovery of Interface Materials (PARADIM), Cornell Center for Materials Research (CCMR), and Cornell High Energy Synchrotron Source (CHESS) facilities and was funded in part by the National Science Foundation under award numbers DMR-1539918, DMR-1719875, and DMR-1829070, respectively. M.A.S. acknowledges support from the NSF GRFP under award number DGE-1650441. The FEI Titan Themis 300 was acquired through grant no. NSF-MRI-1429155, with additional support from Cornell University, the Weill Institute, and the Kavli Institute at Cornell. Substrate preparation was performed in part at the Cornell NanoScale Facility, a member of the National Nanotechnology Coordinated Infrastructure (NNCI), which is supported by the NSF (grant no. ECCS-1542081). This research was also supported by a grant from the United States-Israel Binational Science Foundation (BSF), Jerusalem, Israel, and the United States National Science Foundation (NSF). This research was supported by the Nancy and Stephen Grand Technion Energy Program (GTEP). This article is based upon the work from COST Action 18234, supported by COST (European Cooperation in Science and Technology).

This work was highlighted in the Cornell Chronicle.