Through the CHESS-U upgrade, the X-rays produced at CHESS are now brighter than ever.  Combining these brilliant X-rays with new and inventive detectors developed by the Cornell Detector Group will provide new possibilities for X-ray experiments that are not possible today. 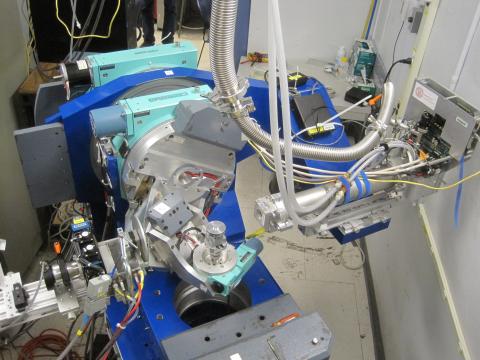 The MM-PAD-1.0 set up at the former G2 endstation for use in an experiment looking at crystal truncation rods

Detectors are critical to any synchrotron lightsource, they help characterize the samples being probed, as well as the X-rays that interrogate them.  Certain detectors can tell researchers about the intensity, energy, position and timing of X-rays; all crucial information needed to commission and tailor experiments for users.   The detector’s main purpose for the users of CHESS, however, is to produce detailed imagery, revealing hidden traits in samples such as proteins, electronics, and thick metal samples.

The development of next generation detectors is a lengthy process, taking many years and tens of millions of dollars.  The group, led by former CHESS director Sol Gruner, has been able to hasten this process by developing a strong relationship with CHESS, resulting in real world experiments to test and modify their detectors - something that simply cannot happen outside of a high energy x-ray source like CHESS.

Of course, CHESS has also benefitted through this relationship with access to the world’s brightest researchers in detector development and to unique prototype detectors that enable users to perform experiments that would not otherwise be possible.

The group’s latest detector, the MM-PAD-2.1, has been in the works for years, and can really be traced back to the thesis work of then-graduate student Dan Schuette (now at MIT Lincoln Labs), which culminated in 2007 with the development of a single module MM-PAD-1.0 camera (128 pixels x 128 pixels). This unit was characterized using in-house calibration sources and exercised in a few experiments at CHESS that demonstrated its potential as a wide dynamic range imager.  Years passed and the detector progressed. In 2012, the group worked with CHESS engineers to build a medium format tiled camera (256 pixels x 384 pixels), and performed experiments at CHESS as well as the APS.

“Using a beamline is critical to understand how the detector is operating and also how it is failing,” says Kate Shanks, Research Associate with the Cornell Detector Group.  “We learned a lot of practical things about the detector while experimenting at CHESS. There were things that would perform perfectly fine in our lab, but would not work when the detector was hooked up to the beamline’s interface and instrumentation.”

Other irregularities would worry the team while they were testing in-house, says Kate, but would not be a big concern at the beamline. “There were spatial distortions that would redirect charge from their ideal path on the detector, and we would try to correct these in our lab. But while doing actual user experiments using X-ray diffraction, we realized the initial distortions were very trivial, and the corrections we made would introduce new obstacles. Other calibrations, such as pixel gain mapping and frame-by-frame common mode corrections, proved to have a much greater impact in user experiments, and in response to that we’ve developed calibration codes to correct for these in real time.”

Fast forward a few more years to 2019, and the Detector Group is continuing its development of the MMPAD 2.1, which moves past using silicon as a sensor material.  As silicon is widely used and understood in the detector world, it does not have the stopping power, or the ability to absorb high-energy X-rays.  Other elements or compounds with higher atomic numbers are being pursued.

Kate explains that Cadmium Telluride, CdTe, is the compound of choice for the new detector. The group has chosen to develop CdTe-based versions of the world-leading MM-PAD and Keck PAD detectors to allow experiments at x-ray energies up to >100 keV, and the MM-PAD-2.1 is expected to perform much more efficiently with the higher flux and higher energies possible after CHESS-U.

“The CHESS-U upgrade has deepened our motivation to explore high-Z sensors. This is a hot topic in the x-ray detector community at large, but became especially relevant for us when it became clear that high-energy experiments would be a major emphasis at CHESS-U.”

The group’s main focus is to now develop the MM-PAD-2.1 into a next-generation wide-dynamic-range area detector, along with continued investigations of high-Z sensors for x-ray experiments above 20 keV. “Both projects will benefit CHESS,” says Shanks, “especially given CHESS-U’s focus on increased flux and delivery of high-energy x-rays to users.”

Experiments enabled by the detector like the MM-PAD-2.1 would greatly impact the Structural Materials Beamline of MSN-C and the FAST beamline of CHEXS, which both operate well above the 20keV threshold – the energy where silicon-based sensors drastically lose efficiency.   These experiments include investigations into the development of cracks in steels and alloys used for airplanes and turbines, as well as to study the strength of additive manufactured materials.

For these new science applications to be performed at higher energies, different approaches are required.  CHESS-U has brought an intense improvement to the beam, and the steadfast relationship with the Cornell Detector Group will only make things brighter.