Jacob Ruff has been named the new director of the Center for High-Energy X-ray Sciences at CHESS (CHEXS @ CHESS). In his role, Jacob will lead research at the five beamlines of CHEXS while supporting education and training, particularly of researchers in biological sciences, engineering, and materials research. 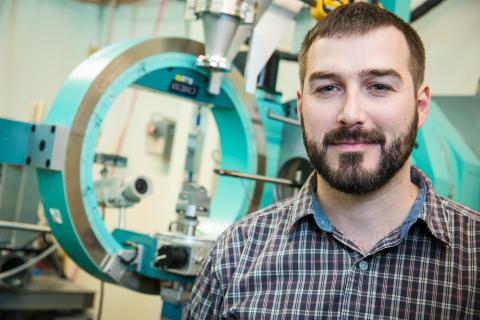 While Jacob has been at CHESS as a Staff Scientist since 2012, he is excited to be transferring to his new directorship. We asked him a few questions about his career so far and his hopes for the future of CHEXS.

Could you share a bit about your background and interests?

I studied physics as a student, first as an undergraduate at the University of Waterloo, and later as a graduate student at McMaster University, both in Canada (where I grew up). In my final year at Waterloo, I started to be interested in the statistical and quantum properties of materials. Specifically, I wanted to understand how large numbers of electrons and atoms compete and cooperate to form different kinds of ordered states, and how these states imbue materials with different unique properties. As a graduate student I became a user of large scattering facilities (both neutron and x-ray), which let me observe these ordered states with a high level of precision.  Later, I moved to the USA to join Argonne National Lab as a postdoc, working on understanding the evolution of these states in high magnetic fields. After a few years at Argonne, I moved to Cornell to join the permanent staff at CHESS, and I have been working with users on CHESS x-ray beamlines for the past 8 years.

What are you most proud of in your previous work at CHESS?

What are you most excited about becoming the director of CHEXS?

CHEXS is the home of fundamental, curiosity-driven science at CHESS.  This is the part of the lab that supports the broader research community, making the instruments accessible to all researchers in many different disciplines. CHEXS has direct impact training students and postdocs to be future leaders in synchrotron x-ray technology. I’m excited about the opportunity to work across disciplines with the outstanding team of CHEXS scientists, to take full advantage of the new CHESS-U x-ray beams and cutting edge instrumentation. I’m also excited to help shepherd new initiatives, like the recently announced High Magnetic Field beamline which we will be building over the next few years.