Development of new bunch pattern at CHESS for dynamics studies

The recent upgrade of the storage ring has positioned CHESS as a synchrotron facility that is well-suited for in situ studies of materials dynamics with sub-microsecond temporal resolution. 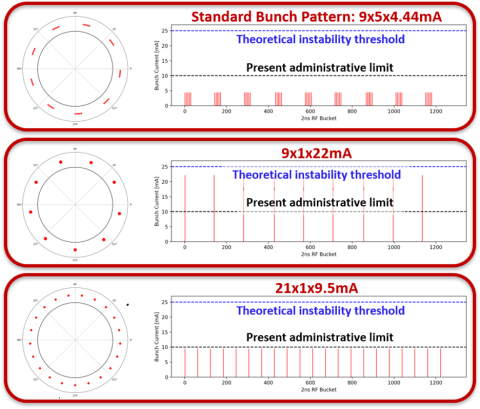 Schematics of bunch patterns evaluated in early 2020 for timing mode at CHESS.
Top: Typically the CHESS storage ring is operated in a bunch pattern of 9 bunch trains consisting of 5 bunches each. Middle: In the 9x1 mode 9 approximately-equally-spaced bunches contain 22 mA (57 nC) per bunch. Bottom: 21 evenly-spaced bunches each with 9.5 mA (24.4 nC) per bunch leads to 122 ns between bunches which is well-matched to current detector technology.

The recent upgrade of the storage ring has positioned CHESS as a synchrotron facility that is well-suited for in situ studies of materials dynamics with sub-microsecond temporal resolution. Many other synchrotron user facilities in the US and world-wide are pursuing upgrades to maximize the spatial coherence of their x-ray beams, which is accomplished by reducing the emittance (effectively, the cross-sectional area in phase space) of the electron beam in the storage ring. While undoubtedly useful for techniques that require high coherence (such as phase contrast imaging and coherent diffractive imaging), this approach requires strong focusing magnets, which in turn requires small apertures. Because the maximum possible current in a bunch scales as the cube of the aperture size, the maximum bunch current in these next-generation machines will be significantly limited compared to present-day storage rings. These observations suggest that CHESS can position itself as a premier facility for time-resolved experiments that do not require high spatial coherence of the x-rays, including x-ray imaging, x-ray diffraction, and x-ray spectroscopy since the charge per electron bunch at CHESS can be much larger than at other high-energy synchrotrons.

During typical CHESS operations, the storage ring is filled with nine approximately-equally-spaced trains of five bunches each. While this so-called “9x5” pattern has its origins in the two-beam high-energy physics program, it has proven useful for single-beam operations as it balances the opposing requirements of having a large number of bunches to improve beam lifetime and maintaining large gaps to mitigate the buildup of electron-cloud-induced instabilities.

New fast-framing x-ray area detectors such as the Keck-PAD enable scientists to monitor dynamics processes on the timescale of hundreds of nanoseconds. Ideally the detector frame rate would be matched to the bunch repetition rate in the storage ring, with a small number of high-charge bunches. We refer to operating the storage ring with a bunch pattern compatible with fast-framing detectors as “timing mode”.

Bunch patterns with equally spaced bunches available for timing mode are limited by the numerology of the RF system. At CHESS, the 500 MHz RF cavities enable 1281 2-ns-spaced “buckets” around the storage ring where a bunch could occur. The only divisors of 1281 are 3, 7, and 61, which limits the available patterns where bunches are exactly equally spaced. Additionally, the maximum per-bunch current is presently limited to 10 mA (25.6 nC) / bunch for equipment protection. This limit could be exceeded up to a theoretical instability threshold of around 20-25 mA (50-60 nC) / bunch with some well-defined and small scale upgrades to the storage ring. The full CHESS design current is 200 mA.  Maintaining an average current of 200mA to allow regular user operations at CHESS beamlines not performing dynamics experiments is a boundary condition for the development of the timing mode described here. The average current, maximum charge per bunch and desired spacing of bunches sets the parameter space for possible bunch patterns.

Fortunately, 21 evenly-spaced bunches is a highly desirable configuration. With 9.5 mA (24.4 nC) / bunch this pattern requires no upgrades to the storage ring hardware, and 122 ns between bunches is well-matched to the capabilities of the Keck-PAD. Similarly, the maximum per-bunch current could be utilized by modifying the present 9x5 pattern to be 9 approximately-equally-spaced bunches at 22 mA (57 nC) / bunch. The mode is referred to as 9x1 mode. Both of these patterns will yield a total current of 200 mA, such that users not utilizing the specialized bunch pattern will remain unaffected.

Both “21-bunch mode” and “9x1 mode” were explored in machine studies during the startup for the Spring/Summer 2020 CHESS run. The 21-bunch mode was demonstrated up to a total of 150 mA, the maximum current certified for radiation shielding in the CHESS experimental hall. The 9x1 mode was also demonstrated up to the administrative limit of 10 mA / bunch, for a total of 90 mA. Both bunch patterns showed promise, insofar as no instabilities or hardware issues were encountered.

Further machine studies are planned for this fall, potentially taking the 21-bunch mode up to the full 200 mA design current. Discussions are underway regarding what equipment protection precautions must be taken prior to increasing the 10 mA / bunch limit for 9x1 demonstrations.