The driving force behind Cornell Compact Undulators at CHESS

Researchers at CHESS are working to further improve the already impressive CHESS Compact Undulator, or CCU. Within the new NSF-funded CHEXS award, Sasha Temnykh is developing a new driving mechanisms that will add variable gap control and even better tuning of the device, both desirable qualities for a variety of experimental needs. 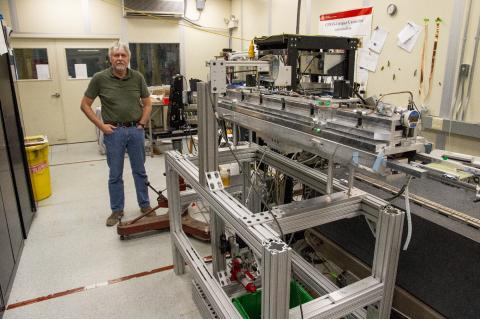 Sasha Temnykh is the driving force behind the Cornell Compact Undulator design and development.

Undulators are critical devices for the creation of brilliant X-rays at CHESS and other lightsources around the world.  With the recent CHESS-U upgrade, the Cornell Electron Storage Ring, CESR, is now outfitted with seven new insertion devices.  As the beam circulates around CESR, it passes through a series of alternating magnets in the undulators, resulting in X-rays that are roughly 20 times brighter than those produced prior to the upgrade, making CHESS an even more powerful X-ray source.

Researchers at CHESS lead by Sasha Temnykh are working continuously to improve the already impressive CHESS Compact Undulator, or CCU. The CCUs are about ten times more compact, lighter, and less expensive compared to conventional insertion devices typically used at other lightsource. They also require a significant shorter fabrication time.  Nine CCUs have already been constructed in industry from the Cornell-held patent, and according to KYMA, the manufacturer of the CCU, other labs are starting to show interest in the device.

The new research and development at CHESS Sasha and his colleagues are pursuing aims to overcome both of these issues by developing a hydraulic assisted driver for the insertion device, allowing for precise control of the insertion device gap while maintain in the same lightweight compactness of the existing CCU.

At this time CCUs are tuned by shifting two magnet array longitudinally, i.e. along the direction of storage ring beam, to control the wavelength of the generated x-rays. Currently, the undulator gap, i.e. the vertical distance between the magnet arrays, is fixed. The proximity of the top and bottom magnet arrays creates such a strong attractive force that introducing a range of motion could significantly warp and distort the lightweight device and impact the field quality.  In devices at other facilities, these distortions are avoided through rigid and massive mechanical components that are drastically larger and heavier than the CCU.

Temnykh, who has been the driving force for the Cornell Compact Undulator at CHESS, has a different approach. He collaborated with his son Ivan at Pine Hollow Auto Diagnostics, and others at CHESS, to develop a system that compensates for the magnetic forces acting on the insertion device magnet array. This method involves installing a number of compact hydraulic cylinders along the device, all being activated by the same pressure and maintained through a computer-controlled closed-loop feedback system. The hydraulic cylinders compensate for over 90% of the strong forces generated by the magnetic field, reducing the load applied to the mechanical driver to less than 10% of the total load.

This elegant approach maintains the millimeters-wide gap with a precision of 1-2 microns across the span of the 1.5 meter device.The long term stability of the hydraulic system was tested over a five-day period, with no more than a 2 micron deviation from the target

The next step is to implement this drive mechanism into an existing 1.5m CCU by adding the hydraulic assistance to the current mechanism.  This is now in production, and Temnykh hopes to install the complete device into the CESR storage ring later next year creating even more powerful and versatile insertion devices.

A publication about the research can be found here