In spring 2021, the fourth generation of Rotation and Axial Motion System (RAMS IV) load frame was commissioned with X-rays at the Structural Materials Beamline (SMB). 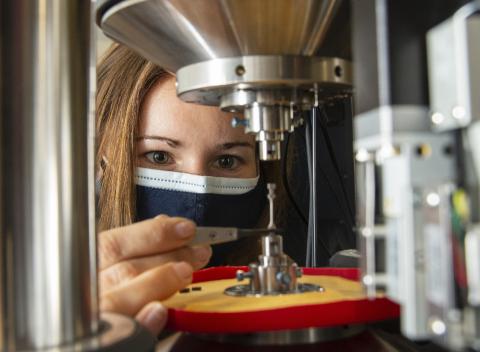 What did the scientists do?

The main objectives of commissioning were to enable communication between the existing control system of the beamline (SPEC) and the new control system of RAMS IV (Aerotech), and to synchronize triggering of X-ray detectors with positions of the rotation stages on RAMS IV. To this end, a number of new scripts were written and tested for both SPEC and Aerotech for executing commands, exchanging experimental parameters, interlocking and “handshaking” between the two systems. During the last few days of commissioning, a series of X-ray measurements were performed on a sample mounted on RAMS IV to test the main functionalities of the new load frame.

Two RAMS IV frames were built: (1) a CHESS design for in-situ X-ray studies, and (2) an AFRL design for ex-situ studies. The AFRL machine can be used for ex-situ proof-of-concept, preparatory loading, or longer mechanical loading tests that can complement and inform work that is done in situ on the CHESS machine.

RAMS IV is optimized for simultaneous tension, torsion, and fatigue loading. Torsion and fatigue loadings are new features over the second generation of RAMS (RAMS II) that has been (and is still being) used with many user experiments at CHESS.

To fully exploit the power of X-rays to produce grain-by-grain stress tensors and orientation maps during in-situloading, a sophisticated, high-precision load frame that is capable of simultaneous loading and rotation (continuous through 360˚) of a specimen in the X-ray path is required. This data is necessary to elucidate transient behaviors during the deformation of materials and improve constitutive models.

Commissioning the new load frame with X-rays now allowed scientists at CHESS and AFRL to gain experience and confidence with operating the load frame at the beamline. Moreover, they can now devise a plan for offline bench tests during the upcoming summer down in preparation for future experiments.

Why did this work need MSN-C and CHESS?

Commissioning of these types of devices takes dedicated time, resources, and expertise which MSN-C can prioritize and CHESS and AFRL can provide.

The Materials Solutions Network at CHESS (MSN-C) is supported by AFRL under award FA8650-19-2-5220. The RAMS IV load frames were funded by the Air Force Office of Scientific Research (AFOSR).