EGCG, a polyphenol compound found in green tea, has a proven anti-cancer effect. Studies now suggest that EGCG works by binding to the potent anti-tumor protein p53 and stabilizing it, so that its activity against cancer is increased. Several experiments, including BioSAXS at CHESS ID7A, support this conclusion. 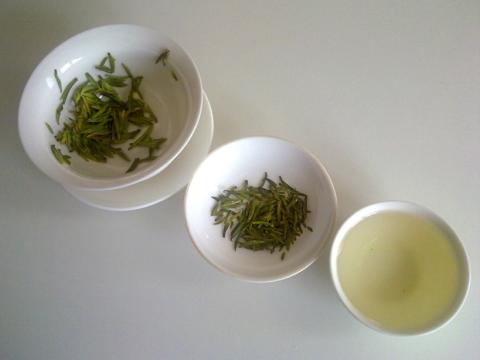 EGCG, a polyphenol compound found in green tea, has a proven anti-cancer effect.

What is the new work?

The tumor suppressor protein p53 is an important part of the body's defense against cancer. However, p53 can also be hazardous to normal cells, so its concentration is normally maintained at low levels. Increasing the amount of p53 can be an effective way of treating cancer, and one method of doing so is by preventing its inactivation by the regulatory molecule MDM2. Epigallocatechin gallate (EGCG), a polyphenol found in green tea, is capable of doing this, and the Wang group (Renssalaer) has conducted a series of experiments, including BioSAXS at CHESS, to determine how it works. It has been established that the N-terminal domain (NTD) of p53, which is intrinsically disordered, is the site of interaction with MDM2, but the nature of the interaction was unknown. The affinity of MDM2 for NTD alone is similar to that for intact p53, so experiments were conducted with isolated NTD. NMR was used to locate binding sites for EGCG on NTD, and showed that there were multiple interaction regions. Small angle X-ray scattering (SAXS) and analytical ultracentrifugation were used to follow overall conformational changes; they showed that EGCG produces a shift in the average conformation towards a more compact and better ordered form (Figure 1).

These results provide insight into the mechanism by which p53 is regulated, and suggest approaches for controlling the amount of p53 that is available to destroy cancer cells. The interaction between EGCG and the NTD of p53, that prevents inhibition of p53 by MDM2, is highly dynamic and involves multiple interaction regions.

The work adds to the growing list of examples of dynamic interactions between intrinsically disordered proteins and small molecules, and specifically identifies the NTD of p53 as a potential target for anti-cancer drugs.

Station ID7A provided the state-of-the-art equipment and excellent support required to obtain the high-quality BioSAXS data used in the work.

Funding was provided by NIH R01, T32, R35, and R15 grants to the authors. Data were collected at CHESS station ID7A, supported by National Science Foundation grant DMR-1829070 to CHEXS, and by NIH grant P30-GM-124166 and NYSTAR funding to MacCHESS.