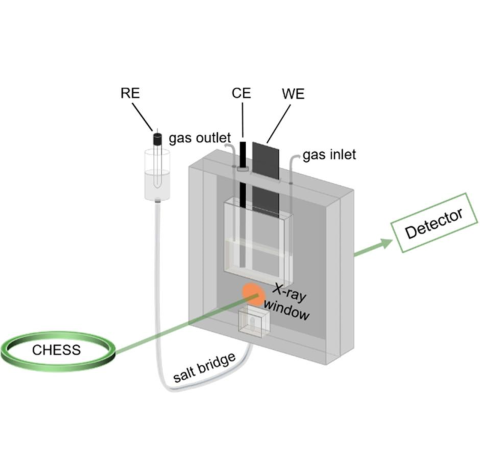 Schematic of the in situ XAS electrochemical cell. Working electrode (WE, catalyst on carbon paper) and counter electrode (CE, carbon rod) were immersed in 1 M KOH solution. The reference electrode was connected to the cell by a salt bridge to minimize IR drops caused by the resistance in the thin electrolyte layer within the X-ray window.

What did the scientists discover?
Identifying the catalytically active site(s) in the oxygen reduction reaction (ORR) is critical to the development of fuel cells and other technologies. Researchers employed synchrotron-based X-ray absorption spectroscopy (XAS) at CHESS to investigate the synergistic interaction of bimetallic Co1.5Mn1.5O4/C catalysts – which exhibit impressive ORR activity in alkaline fuel cells – under real-time operando electrochemical conditions. Under steady state conditions, both Mn and Co valences decreased at lower potentials, indicating the conversion from Mn-(III,IV) and Co(III) to Mn(II,III) and Co(II), respectively. Changes in the Co and Mn valence states are simultaneous and exhibited periodic patterns that tracked the cyclic potential sweeps.

Why is this important?
As an emerging candidate for energy-conversion devices, alkaline fuel cells have drawn increasing attention enabling the use of nonprecious metal electrocatalysts, rather than the expensive Pt-based catalysts. Among these, 3d metal oxides have garnered increasing interest as ORR electrocatalysts due to their high activity, long durability and low cost. However, the limited understanding of the complicated electrocatalytic mechanism of ORR on these materials has hindered the progress. Researchers at CHESS investigated a highly active 3d bimetallic electrocatalyst Co–Mn oxide and, based on in situ XAS measurements, and propose that Co and Mn serve as synergistic sites to catalyze ORR.

What are the broader impacts of this work?
To the best of our knowledge, this represents the first study, using in situ XAS, to resolve the synergistic catalytic mechanism of a bimetallic oxide. Strategies developed by the research team provide a promising approach to unveil the reaction mechanism for other multimetallic electrocatalysts.

Why did this research need CHESS?
X-ray absorption near edge structure (XANES) was used to track the dynamic structural changes of Co and Mn under both steady state (constant applied potential) and nonsteady state (potentiodynamic cyclic voltammetry, CV).  Rapid X-ray data acquisition, combined with a slow sweep rate in CV, enabled a 3 mV resolution in the applied potential, approaching a nonsteady (potentiodynamic) state. The PIPOXS beamline which is part of the Center for High Energy X ray Sciences (CHEXS) at CHESS will allow similar studies in the future.

How was the work funded?
This work is based upon research conducted at CHESS which was supported by NSF under award DMR-1332208 and at CCMR supported through the NSF MRSEC program (DMR-1719875). This work was also financially supported by DOE under award No. DE-SC0019445 and the National Natural Science Foundation of China (21872108, 91545205).