Understanding the behavior of metals undergoing deformation is critical to design for fuel efficiency, performance and safety/crashworthiness. Traditional engineering analysis treats metal deformation as a smooth motion, like a fluid, when in reality the flow is intermittent at finer length scales.  Use of a new detector enabled the study of these intermittent bursts of deformation at the scale of individual crystals in a loaded test sample. 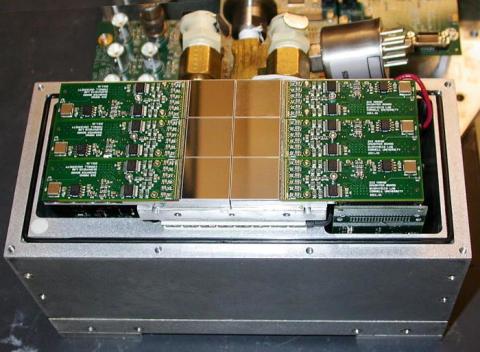 The MM-PAD is shown with the vacuum cover and x-ray window removed. The 2x3 arrangement of detector modules are the brownish squares in the center.  Each module consists of 128x128 square pixels, where each pixel is 150µm of a side. Each module is roughly 2 cm x 2 cm in size. There is a 5 pixel wide (0.75 mm) inactive area between adjacent modules. (This photo is of an MM-PAD with Si, instead of CdTe sensors; otherwise, the two types of MM-PADs look identical.)

A metal component is polycrystalline, composed of many crystals or grains. At the scale of millimeters, the deformation of a metal appears to proceed smoothly, whereas at the microscopic scale the underlying processes occurring in individual grains proceed in fits and starts.  In this collaboration between researchers at Cornell University, the University of Illinois at Urbana-Champaign, the Air Force Research Laboratory and the Advanced Photon Source of Argonne National Laboratory, a high-speed detector was used to study these microscale deformation bursts in a grain-by-grain manner.

Two alloys were studied, one titanium alloy and the other magnesium based.  Distinct and isolated bursts of deformation were observed in grains of the titanium alloy, with these events varying considerably in magnitude.  In contrast, while discrete deformation events were observed in the magnesium alloy, the size of these localized deformations did not vary so much and were relatively mild.  The results suggest that existing models for metal deformation may be applicable for many alloys, like the magnesium alloy studied. However, for other complex structural alloys -- used in demanding applications like aerospace -- deformation models can be advanced to better account for action at the grain-scale using data acquired by a high-speed detector.

As metallic alloy systems become more complex, and demands for light-weighting, efficiency, performance and safety increase, it becomes necessary to advance engineering fundamentals to consider the microscale behavior as part of the design process.