In February 1988, Ken first arrived at CHESS with his first assignment: to build a wiggler. Since that time, Ken has been instrumental in keeping CHESS at the forefront of X-Ray emission spectroscopy, and that first wiggler (for many years called F line wiggler) is still in the tunnel generating x-rays for Sector 1.  Ken is now retiring, leaving his mark on not only CHESS, but the synchrotron community at large. 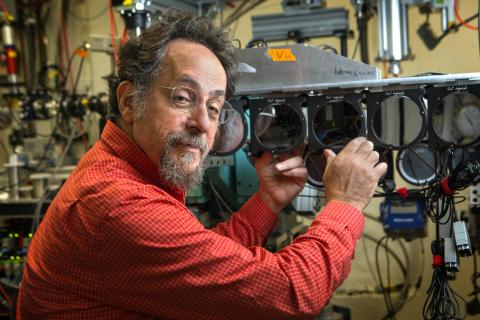 Ken with DAVES, the X-ray emission spectrometer designed by Ken, and others at CHESS.

Before he could build the wiggler at CHESS, an opportunity arose for Ken to learn how to use the first hard x-ray undulator prototype for APS.  Ken participated in a month-long beam test on how to steer the beam through the undulator.  "My 'particle of choice' was neutrons," says Ken, "and this was a chance for me to learn how x-rays work.”

Since that time Ken has helped revolutionize X-ray resonant scattering, building the first hard-x-ray polarimeter capable of measuring all components of a sample. While Ken may be retiring, his work will advance at CHESS, with Jacob RUFF continuing the research at Sectors 4 and 5.

Ken reviewed a few of his accomplishments as part of a farewell presentation on August 28th and many of his colleagues used the opportunity to express their appreciation for Ken’s contributions to synchrotron science and shared many anecdotes about Ken’s activities at CHESS.

Now that Ken is retired, he says that he hopes to come back as a user at CHESS.  But in the meantime, he plans to "turn some bowls" in his new (yet to be built) woodshop. He also plans to continue his community service with the Friendship Donations Network.

Thanks and Congratulations Ken!