Particle storage rings are highly complex scientific instruments and minute changes in temperature, position or current through one of its many magnets can have a large impact on the position of the particle beam. At CHESS, the accelerator group works tirelessly to even further improve the beam position stability and with that to enhance experimental capabilities at the beamlines. 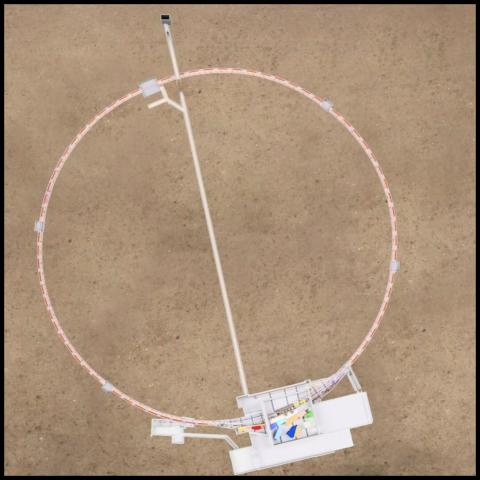 Schematic of the storage ring and the experimental hall (bottom) at CHESS/Wilson Lab.

The CHESS-U upgrade project reconfigured and optimized the storage ring for the production of intense x-ray beams and learning is ongoing about the positron beam’s position dependence on the temperature, mechanical and electrical stability of the magnets and beam chambers.

The accelerator group continues to look for methods of improving beam stability across different spatial and temporal scales.  A “global” correction scheme has been developed and is being tested to identify point sources of orbit kicks that propagate around the ring.  The method uses measured beam positions around the entire storage ring compared to a reference position measurement made during optimal beam alignment.  Accelerator lattice functions are used to model possible kicks and compare the result to a measured change in the beam orbit.  The calculated magnet changes are then made to the physical magnets in the ring.  The scheme has been validated during operations without users and has correctly identified magnet errors put in intentionally.  The period for the correction during testing was 1 minute per correction.

An operational concern with this local correction method was that steering magnets would approach their electrical current limits and further corrections in that direction would not be possible.  A method of corrector “ironing” was used where sets of steerings could be changed in combinations that would have no effect on the x-ray beam source point.  The results have been promising and the method is now part of the standard alignment process.

Another stability issue being investigated is on the much longer time scale.  Position drift over the course of up to 10 hours can occur after the accelerator ring magnets have been turned on.  Experiments and analyses are ongoing to identify the sources of these temperature driven orbit changes.  A technique using singular value decomposition to analyze the accelerator beam orbit data over the time periods of interest is being pursued.  Using the method, a matrix of the measured position data is decomposed into characteristic position and time vectors.  The characteristic time vectors can be compared to an external measurement’s time history, e.g. the magnet cooling water temperature.  If a close match is found, then the method gives the precise position changes of the beam that follow that time signature.  Those position changes can then be analyzed with standard modeling techniques to identify locations which are sensitive to temperature.