This article was originally published in Synchrotron Radiation News. 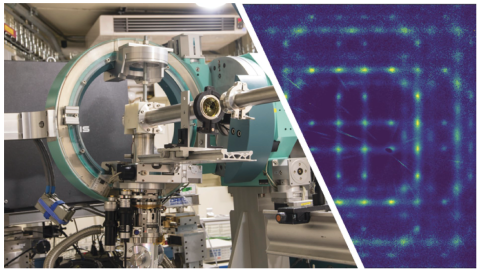 CHESS, the Cornell High Energy Synchrotron Source, is a high- intensity X-ray source located on the Cornell University Ithaca campus. Since its inception in 1980, CHESS has been a leader in the production and utilization of high-energy X-rays [1], and to this day CHESS pro-vides users state-of-the-art synchrotron radiation facilities for research in physics, chemistry, biology, environmental sciences, engineering, and materials science. X-rays ranging in energy from 5 keV to 200 keV are employed to map the atomic, electronic, and magnetic structure in real space (microscopy, tomography, imaging experiments), reciprocal space (X-ray diffraction experiments), and time (dynamics and time-dependent effects). Like many synchrotron facilities, CHESS initially operated parasitically at a high-energy particle accelerator intended for particle physics experiments. CHESS X-ray sources were based on the "hard bend" magnets that created the long straight section in the Cornell Electron Storage Ring (CESR) necessary to accommodate the particle physics detector known as CLEO. Operating typically at 5.5 GeV and a bend radius of 32 m, these hard bend magnets produced a critical energy of 16.5 keV, well above that available at that time at NSLS and other second-generation sources.

In fact, pioneering high-energy diffraction experiments [2] using a triple-axis diffractometer [3] were performed at CHESS in 1989 employing the 6-pole, 1.6T wiggler with CESR operating at 5.4 GeV. A photon energy of 145 keV was chosen, since for photons with energies of order of one to several hundred keV the dominant contribution to the total absorption cross-section comes from incoherent scattering and is almost independent of energy, while photoelectric effect and coherent scattering are small. Choosing the lowest energy in this region maximizes the photon flux, since the synchrotron radiation spectrum falls exponentially, and the Bragg angles fall approximately linearly with increasing energy in this regime.

As insertion device technology began to be developed in the early 1990s, CHESS deployed a 25-pole wiggler with a peak field of 1.2 T (critical energy of 24 keV at 5.4 GeV) that was one of the highest flux X-ray sources in the world for wavelengths shorter than 1 Å [4]. These sources enabled CHESS to be an international leader in hard X-ray techniques such as crystallography and high-pressure studies in diamond anvil cells until the development of high-energy third-generation sources such as ESRF, APS, and SPring-8 in the mid- to late 1990s.

Over the years, beamlines have been added and upgraded, and after the high-energy physics experiments concluded in 2008, CESR has been used mainly as an X-ray source. In 2018/2019, CHESS undertook a major upgrade, which was funded by New York State, and involved reconfiguring and optimizing the synchrotron storage ring for the production of intense high-energy X-rays and the concurrent upgrade of the X-ray experimental capabilities to exploit the redesign of the storage ring. An increase in flux and energy of the X-ray beams was achieved by increasing both the energy of the stored positron beam (from 5.3 GeV to 6.0 GeV) and the positron current (from 100 mA to 200 mA). Moreover, the emittance was considerably reduced, resulting in smaller and more collimated X-ray beams. These enhanced capabilities place CHESS as one of only five high-energy, third-generation synchrotron sources in the world. The high-energy X-ray beams at CHESS-U penetrate deep into samples, enabling the study of bulk materials, while the high flux enables the study of weak signals. The upgrade has equipped CHESS for the study of diverse systems, ranging from the in-situ characterization of structural materials and catalysts to structural studies of quantum materials as well as high- pressure biological processes; the quantum and structural materials programs are highlighted in this article.

Quantum materials research at CHESS exploits high-energy X-ray beams to uncover intertwined quantum correlations of spins, charges, and orbitals, at low temperatures and spanning entire phase diagrams. The technical capability that enables this research is called High Dynamic Range Mapping (HDRM), which has been developed collaboratively by CHESS users and staff scientists over the past five years. HDRM is primarily a method for studying single crystal samples, although it can also be effective for studying thin films. The aim of HDRM is to rapidly survey wide regions of reciprocal space, collecting the intense Bragg peaks required to refine crystal structures, the weak features associated with superstructures (spin and/or charge order), and the slowly modulated scattering associated with phonons and short-range order. This requires detectors with low noise, single-photon sensitivity, high maximum count rate, millions of pixels, and high frame rates. Combining these detectors with a high flux of high-energy X-rays and the significant computing infrastructure required to handle the large data stream enables HDRM. At CHESS, our implementation of HDRM typically measures the scattering intensity at ~30 million distinct Q positions each second. This deluge of "total scattering" information is fed into sophisticated computational workflows to extract subtle details of sample phenomenology. The use of high-energy X-ray beams is essential for comprehensive survey measurements, where significantly larger volumes of reciprocal space can be projected onto finite-sized area detectors, and even heavy-element-containing crystals can be studied in transmission geometry over full sample rotations without concerns about beam attenuation.

In recent years, a significant fraction of HDRM research at CHESS has focused on developing a detailed understanding of electronic symmetry breaking in nematic, gyrotropic, and charge-density-wave-ordered quantum materials [5–10]. Other applications of HDRM include....