On July 31st, all seven CHESS beamlines scheduled for user operation in fall were being fully operated by remote connection - all at the same time - sometimes with 2 people connecting simultaneously to one machine. 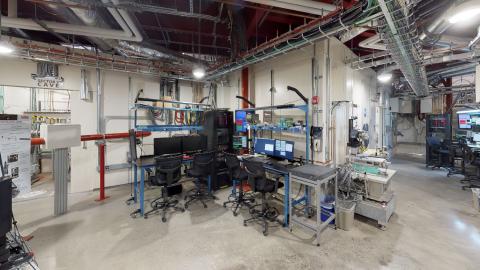 The test was dubbed a “stress test”, testing the strains on the bandwidth coming from outside of the lab, and into each station, with IT personnel monitoring each computer. As CHESS moves toward 100% remote operation for the fall run, CHESS staff is working to ensure a smooth transition, and these stress tests are proving useful.

Werner Sun, CLASSE IT Director, explains that the IT group saw no network congestion during the first stress test, and no “show-stopper” problems. “It is pretty much full steam ahead at this point,” he says.

The other goal of this first stress test was to determine which remote software is to be used by CHESS staff and users alike.   NoMachine, a remote access software, was the clear winner.  This software, which is already being used in Sector 7, shows great performance with very little lag time. Staff scientists described the experience as if you were actually sitting in front of the station,

To further enable remote operations, multiple cameras are being installed in the experimental hutches.  These cameras, paired with software upgrades, will help perform tasks such as aligning a piece of equipment in the hutch remotely.

While these details are mostly determined, there are many more to consider before users “return” for the fall run. One of these is how to establish clear lines of communication – between remote users, remote staff scientists, and the specialized operations team at CHESS.  While many channels are widely used (Slack, Zoom, email, etc.) the effectiveness of face-to-face meetings will be hard to replace.

Users can expect more information in the next few weeks from the CHESS users office and CHESS scientists. Leading up to their scheduled experiment, users will be able to test NoMachine and overall remote access

Instead of the in-person tours and demonstrations when users arrive, CHESS is focusing on clear and concise user documentation and tutorials that are easy to follow – all efforts to reduce the amount of support that remote users will need from CHESS staff during their run.

Future stress tests will be even more extensive, with more people involved – all trying to “break things” before the beam is turned on.  But one thing is certain in this time of transition; CHESS will remain dedicated to the unique experiments that are desired by the unique users of CHESS, while also working as a training ground for synchrotron science.

When asked about the effectiveness of this during remote operations, Richard Gillilan, staff scientist for sector 7, is optimistic. “We really enjoy training novices, and we’ve traditionally been very good at that. When experienced users come to the beamline in person, there is also a lot of cross fertilization that happens,” says Gillilan. “We (scientists) get to know them, exchange ideas, informally while at the lab. But, if our successful summer student program, and multiple virtual workshops have taught us anything, I am very hopeful that we can maintain this added value during remote operations.