Intertwining quantum order and non-trivial topology is at the frontier of condensed matter physics. In a new paper appearing in the journal Nature Materials, a team lead by M. Zahid Hasan from Princeton University reports the discovery of an unconventional chiral charge order in a kagome material, KV3Sb5. 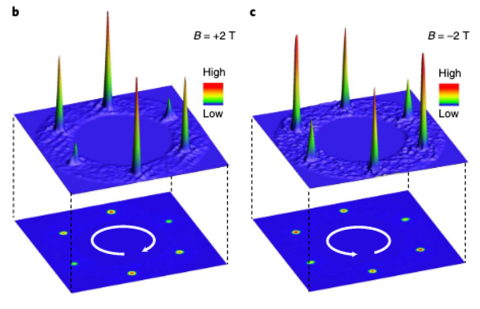 Magnetic response of chiral charge order | 2 × 2 CDW peaks from STM measurements, at magnetic field +2 T and –2 T. The top and bottom panels are three-dimensional and two-dimensional presentations of the data. The chirality can be defined as the counting direction (clockwise or anticlockwise) from the lowest to highest peaks. Chirality is switched by magnetic field.

What is the discovery?
Intertwining quantum order and non-trivial topology is at the frontier of condensed matter physics. In a new paper appearing in the journal Nature Materials, a team lead by M. Zahid Hasan from Princeton University reports the discovery of an unconventional chiral charge order in a kagome material, KV3Sb5. This material exhibits both a topological band structure and a superconducting ground state. The team used scanning tunneling microscopy and high energy x-ray diffraction to identify the details of the chiral phase. An energy gap is observed to open at the Fermi surface when the charge order forms, and the underlying unit cell is seen to double, both in-plane and out-of-plane. This new chiral phase can potentially lead to a large anomalous Hall effect with orbital magnetism and be a precursor of unconventional superconductivity.

Why is it important?
Charge-density-wave-like order with orbital currents has previously been proposed for achieving the quantum anomalous Hall effect in topological materials and as a hidden phase in cuprate high-temperature superconductors.  However, experimental realization of such an order is challenging. KV3Sb5 is a new model system to investigate these effects. Indeed, since the original observation of the chiral phase via STM, several other members of this same family of Kagome materials have been reported to show similar charge-ordered and superconducting behavior. Theoretically, these new kagome materials have many competing electronic instabilities at play, related to the saddle-points in their band structure, and significant experimental work is required to understand their phenomenology.

Why did this research need CHEXS?
The <QM>2 beamline at CHEXS is dedicated to uncovering and characterizing subtle ordered states in quantum materials at low temperatures. The topological charge ordered phase in KV3Sb5 was discovered using STM measurements at Princeton, however, these measurements were unable to conclusively determine the out-of-plane ordering wavevector and prove the bulk, 3D, long range nature of the charge order. X-ray measurements at CHEXS demonstrated that the phase identified at Princeton is indeed bulk 3D and further identified that the unit cell is doubled in the out-of-plane direction. 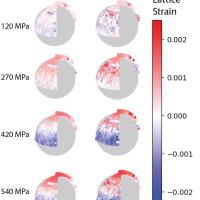 Structural and magnetic transitions in the planar antiferromagnet Ba4Ir3O10 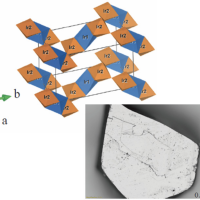