"These findings lay the groundwork for conservation efforts in the context of hydro-power development in the Amazon Basin and set testable hypotheses of the potential impacts of the Madeira River dams." 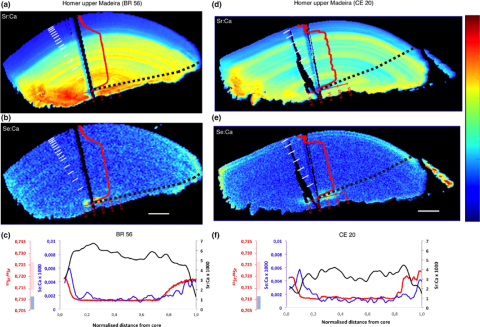 The scientists demonstrated that the Amazonian goliath catfish B. rousseauxii has a complex life cycle, involving partial migration even in the absence of physical barriers, in the upper Amazon Basin. The researchers also made a methodological advance by establishing that synchrotron X-ray fluorescence microscopy (SXFM) can image elemental distributions of strontium, calcium, and selenium which provide information about fish life cycles consistent with and complementary to strontium isotope analysis.

Adult fish that return to their place of hatching to reproduce are said to perform natal homing. Understanding the interactions between natal homing processes of fish in the Amazon Basin and the increasing presence of hydroelectric dams will have profound impacts on fishery management.

These findings lay the groundwork for conservation efforts in the context of hydro-power development in the Amazon Basin and set testable hypotheses of the potential impacts of the Madeira River dams. The use of SXFM in this context enables researchers to understand more details of the individual fish life histories than was previously possible using isotope analysis alone.

SXFM was performed at the F3 beamline of CHESS, at 16.1 keV with a 30 µm spot delivering approximately 4x1010 photons per second. Mapping was performed with dwell times of 0.33-0.45 s per point, enabling screening of entire otoliths with suitably high trace element sensitivity. The high concentration of calcium in otoliths (fish ear bones) can make analysis of trace element composition difficult without the high X-ray photon flux available at CHESS.