The U.S. Navy is seeking to establish digital twin prototypes across the Fleet. A digital twin is a virtual model of a process, product, or service which seeks to pair the virtual and physical world to enable data analysis and system monitoring. A key driver of this digital effort for the materials community is to integrate materials and manufacturing process information with component-level performance and lifecycle analysis. This effort requires accurate material property inputs for simulations, which must be obtained from real materials. 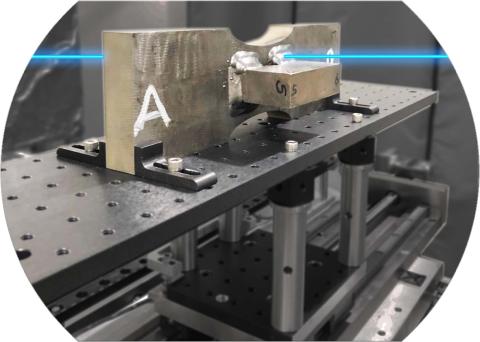 Two-dimensional (2D) scans of the heat-affected zone (HAZ) of two distinct fillet weld regions in a single component showed the effects of welded fabrication on the resultant residual strain. The Energy Dispersive Diffraction (EDD) technique made it possible to penetrate through up to 3.8 cm (1.5 in) of steel to generate these datasets. When compared to a finite-element analysis (FEA)-generated computer model, both 2D scans of showed high correlation, proving the hypothesis. In addition, through-thickness strain measurements were completed on rolled plate and cut shapes of the same steel plate, enabling understanding of the effects of different fabrication processes on residual strain in thick-plate steel. 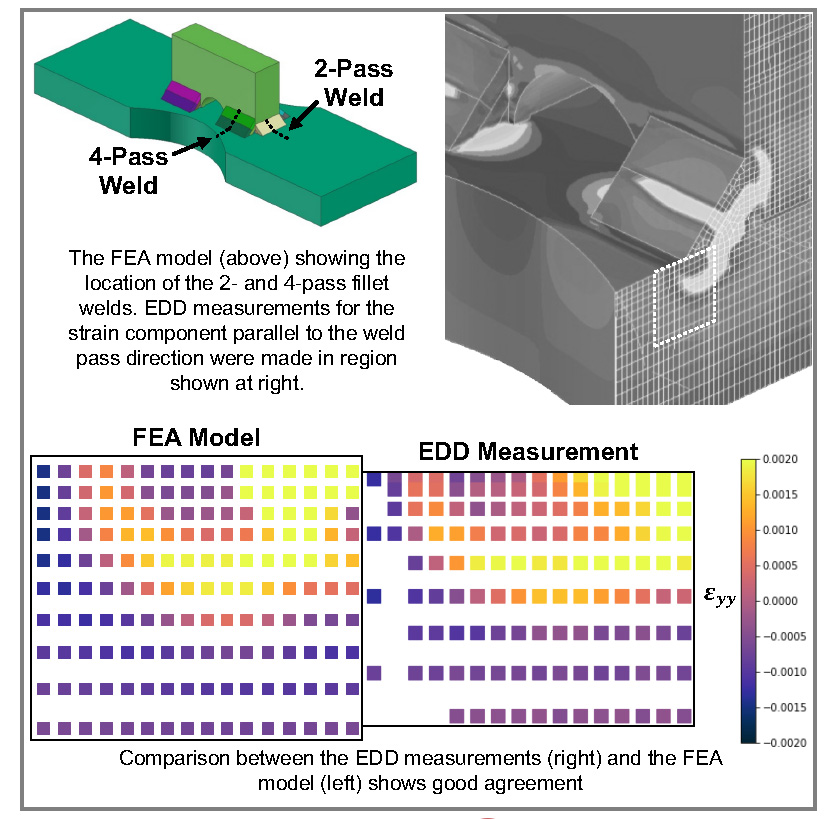 The measurements performed here open up never-before-realized possibilities to nondestructively evaluate residual stress for component-scale models fabricated with industry-relevant techniques. More specifically, the success of these initial measurements at CHESS lays the groundwork to couple detailed models of shipyard-relevant fabrication processes into a single, FEA-based framework, which will be extended to predict changes under mechanical deformation, such as fatigue.

It is well known that residual stress, caused by processing and fabrication of structural materials, such as steel, can cause severe degradation of material and structural performance over the lifecycle of a component. However, quantifying the accumulated stress and its distribution throughout the shipbuilding process is exceedingly difficult in a shipyard environment. The X-ray measurements completed at CHESS yielded strain data which was able to be used for verification and validation (V&V) of FEA models of various manufacturing steps, including plate rolling, heat treatment, cutting, grinding, and welded fabrication. The validated FEA models can thus be used for larger scale analysis as the U.S. Navy seeks to implement a materials-informed digital twin environment.

Why did this research need MSN-C & CHESS?

The measurements described here were performed using white-beam energy-dispersive diffraction (EDD) at the Structural Materials Beamline at MSN-C, and amount to atomic scale measurements through as much as 3.8 cm (1.5 in) of steel. EDD measurements depend critically on the high intensity, high energy X-ray beams available at CHESS, and could not be conducted at existing U.S. Navy or Department of Defense (DoD) facilities.

The X-ray analysis work is based upon research conducted at the Materials Solutions Network at CHESS (MSN-C) which is supported by the Air Force Research Laboratory (AFRL) under award FA8650-19-2-5220. The material fabrication and welding simulations were conducted at the Naval Surface Warfare Center, Carderock Division (NSWCCD) under Naval Innovative Science and Engineering (NISE) Section 219 funding.