Hailing the retention and creation of 250 jobs as one of its most important benefits, Lt. Gov. Kathy Hochul formally announced Nov. 15 that the Cornell High Energy Synchrotron Source (CHESS), a National Science Foundation-supported facility, is the recipient of a $15 million grant from the New York State Upstate Revitalization Initiative. 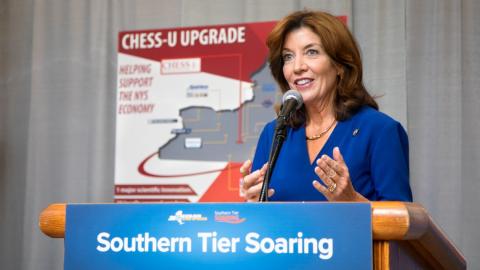 Lt. Gov. Kathy Hochul speaks to a gathering of about 75 media and Cornell staff, announcing a $15 million grant to the Cornell High Energy Synchrotron Source (CHESS), through the Upstate Revitalization Initiative, Nov. 15 at Wilson Laboratory.

The funding announcement was held before a gathering of approximately 75 media members, CHESS scientists and Cornell staff at Wilson Synchrotron Laboratory.

CHESS, which annually attracts more than 1,200 users from around the world to take advantage of its world-class X-ray beams, is using the funding for its “CHESS-U” upgrade initiative. The grant will provide CHESS with enhanced capabilities, making it a leading synchrotron source in the U.S. for high-energy, high-flux studies.

Located 40 feet below the Cornell campus, the nearly half-mile-long accelerator and storage ring is being upgraded to enhance X-ray capabilities generated by rotating positrons.

Synchrotron light from the Cornell Electron Storage Ring (CESR) already produces some of the brightest X-rays in the world. The CHESS-U upgrade aims to raise the current and shrink the size of the X-ray beam, allowing CHESS users a more focused and brighter source of X-rays to study materials and molecular structures of samples.

Hochul praised Cornell as “an amazing partner” of the state, and said the funding was essential to keep CHESS at the forefront of X-ray technology.

“This investment in CHESS telegraphs that, yes, we have a long legacy … but you always have to stay ahead and be a cutting-edge technology,” she said. “What a smart investment this is. It’s not just the 150 jobs that we retain here … it’s the 100 new jobs that are predicted to be created as spin-off businesses develop and continue to grow,” she said.

Pollack began the ceremony by thanking the state’s Regional Economic Development Council system, the Upstate Revitalization Initiative, Gov. Andrew Cuomo, Hochul and Sen. Charles Schumer for their leadership. “They’ve allowed us to compete for funds to better our regional economy. That’s what brought us all here today,” Pollack said.

Scores of scientists from near and far rely on Cornell’s X-ray beams, so improvements will come as good news.

“For all the work that my group and my company has done in this field, CHESS has been absolutely critically important,”

Experimentation at CHESS helped Thorne develop a protein crystallization plate that was sent into space on the SpaceX CRS-8 mission in spring 2016.

From 1979 to 2008, Wilson Lab housed the CLEO (and CLEO II) high-energy detector, which recorded the particles produced in electron-positron collisions at CESR. The detector carried out a broad physics program of studying the production and decay of matter particles, and to search for new phenomena beyond the standard model of particle physics.

With the removal of CLEO in 2016, the first step in CHESS-U, the storage ring now operates with a single beam of positrons instead of counter-rotating electron and positron beams, eliminating many performance limitations associated with two-beam operation. This has enabled all CHESS beam lines to be aligned to a single beam orbit, enhancing the X-ray beam quality for research in physics, chemistry, biology, and environmental and materials sciences.

Over the next five years, CHESS-U is expected to create more than 100 new advanced manufacturing jobs and retain over 150 high-tech jobs by creating a public/private partnership between CHESS and several companies in the Southern Tier, transforming the region into an international provider of advanced synchrotron technology.

Deyhim said the funding and upgrade have been invaluable to his advanced-manufacturing business and others like it in the region.

“There are over 20 manufacturing companies in the Southern Tier that have helped manufacture components for CHESS-U,” he said. “This has allowed ADC and other companies to expand our product offerings to other facilities in the U.S. and around the world.”

Deyhim said that since delivering two experiment hutches to CHESS, his company has received requests for proposals from businesses in the U.S., Brazil and Australia that would total $52 million for his company.

“New York state’s investment in CHESS and the CHESS upgrade means that ADC will expand and will hire more people right here in Tompkins County,” Pollack said. “Moreover, it ensures that the federal government will continue the decadeslong partnership with Cornell to support a truly world-class research facility right here in the Southern Tier.” 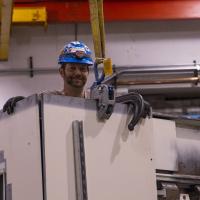