Step-by-Step: Revealing the mechanism of a protein-cleaving enzyme by crystallographic snapshots

"These unusual enzymes have been implicated in diseases ranging from Alzheimer’s disease to malaria, type II diabetes, cancer, Parkinson’s disease, cholera and tuberculosis." 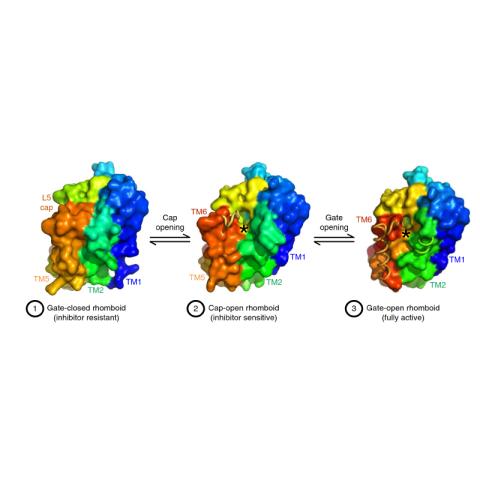 Lateral (membrane) views of structures in surface representation color coded in rainbow colors from amino (blue) to carboxyl (red) termini. Disordered regions are depicted as ribbon-only, and the catalytic serine is marked with an asterisk. The closed form (left) cannot accept either substrates or inhibitors. The cap-open structure (middle) that we visualized as a starting point in the bicelle can accept inhibitors but not substrates. Finally, the gate-open form (right) can accept both substrates and inhibitors. These conformers correspond to the states numbered 1 (left), 2 (middle) and 3 (right) in the model shown on the previous slide.

What did the Scientists Discover?
Protein cleavage inside the cell membrane triggers various signaling pathways, but the mechanism of catalysis is poorly understood. Here, using crystallography capabilities at CHESS, the researchers solved ten structures of the Escherichia coli rhomboid protease, embedded in a bicelle mimic of a cell membrane and reacting with either an inhibitor or an actual peptide substrate. The time-resolved steps observed encompass the entire proteolytic reaction catalyzed by the enzyme. Extensive gate opening accompanied substrate, but not inhibitor, binding, revealing that substrates and inhibitors take different paths to the active site. Catalysis unexpectedly commenced with, and was guided through subsequent catalytic steps by, motions of an extracellular loop, with local contributions from active site residues. The authors even captured the elusive tetrahedral intermediate that is uncleaved but covalently attached to the catalytic serine, about which the substrate was forced to bend dramatically. This unexpectedly stable intermediate indicates that rhomboid catalysis uses an unprecedented reaction coordinate that may involve mechanically stressing the peptide bond, and could be selectively targeted by inhibitors.

Why is this important?
Four large and distinct superfamilies of intramembrane proteases evolved to regulate diverse signaling pathways from bacteria to humans. These unusual enzymes have been implicated in diseases ranging from Alzheimer’s disease to malaria, type II diabetes, cancer, Parkinson’s disease, cholera and tuberculosis. Despite their prominent pathophysiological roles, the steps underlying catalysis have never been observed directly for any intramembrane protease; knowledge of these will be crucial to eventually develop cures for these diseases. Time-resolved crystallography can visualize the discrete actions taken by enzymes during catalysis and thereby directly map out the reaction coordinate.

Why did this research need CHESS?
All X-ray diffraction data were collected using the F1 station at CHESS dedicated to macromolecular crystallography and operated by MacCHESS. The FlexX beamline which is part of the NSF-funded Center for High Energy X-ray Sciences (CHEXS) at CHESS and as well as the NIH/NYSTAR funded MacCHESS will allow similar studies in the future. 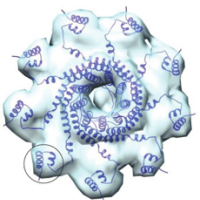